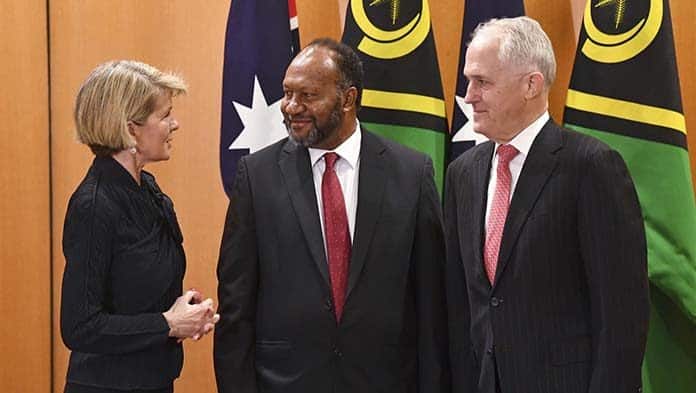 Since the beginning of 2018, the Turnbull government has renewed efforts to assert Australian control and dominance in the Pacific. This comes in response to the China’s takeover of the islands in the South China Sea and growing presence in the south Pacific over the last decade.

Australian influence still exceeds that of China. China spent $2.3 billion on aid projects in the south Pacific in the 12 years since 2006, according to the Lowy Institute. But Australian spending outmatched this in the last two years alone.

Australia’s ruling class has always seen the south Pacific as its own backyard. Along with the US alliance, keeping rival powers out of the region is central to its military and strategic concerns.

Far from creating “regional security”, Australia is interested in maintaining its own economic interests and geo-political control. This is producing growing imperialist tensions and militarism across the south Pacific.

Australia’s recent push in the Pacific is an open secret. The 2017 Foreign Policy White Paper proclaimed, “Australia will engage with the Pacific with greater intensity and ambition”.

Turnbull has scrambled to seal a bi-lateral security treaty with Vanuatu’s Prime Minister, Charlot Salwai Tabimasmmas, following media reports in April that China had approached the country about establishing a permanent military base there. The security treaty will also focus on maritime surveillance and includes a commitment to Australia training 200 police officers.

Turnbull also pushed to lock out Chinese company Huawei from building of a high-speed undersea internet cable to the Solomon Islands, by offering $200 million of foreign aid to fund the project, along with another internet cable to PNG.

Australia wants to stall China’s ability to gain any Pacific foothold through its strategy of “debt diplomacy’—where Chinese firms fund the construction of strategic maritime ports and facilities, and then acquire control due to the inability to repay the loans, as they did in Sri Lanka with strategic port of Hambantota.

In June, Foreign Minister Julie Bishop raised the need for a reformulation of the Biketawa Declaration, an agreement established at the Summit of Pacific Forum leaders in 2000 which established principles for dealing with “civil unrest” among other things. The Declaration was used as the basis for Australia’s military intervention in the Solomon Islands in 2003, known as RAMSI (Regional Assistance Mission to the Solomon Islands).

RAMSI resulted in a raft of Australian diplomats, military and Federal Police being dispatched to islands over the course of 14 years. At the conclusion of RAMSI in 2017, Former Liberal Prime Minister John Howard, responsible for sending Australian military and troops to invade Iraq in 2003, described the RAMSI initiative as, “one of Australia’s, and my government’s, finest foreign policy achievements”.

But Howard’s celebration of the RAMSI model of Australian intervention can’t hide the deep-seated local hostility created by Australia’s intervention. In April 2006, a riot in the country’s capital, Honiara, resulted in the injury of 30 Australian police officers who had been deployed as part of the RAMSI mission. Two died, with one AFP officer shot in the back. At the time of the riot, then PM Michael Sogavare, was outspoken in his criticism of Canberra and Australia’s handling of the situation.

Following the riot, the Solomons government decided to launch an inquiry and report into the causes of the riots, and facing interference by the Australian government, expelled Australia’s top diplomat, High Commissioner Patrick Cole, from the islands in September 2006. Despite Howard and the softer supporters claims that RAMSI was a humanitarian success, more than half of the population remained without access to electricity in 2016.

Although the details of a reformulated “Biketawa Plus” Declaration are yet to emerge publicly, International Development Minister Concetta Fierravanti-Wells told The Australian there had been discussions on co-operation around defence, policing and law and order.

The Australian government clearly wants to use the coming Pacific Islands Forum in Nauru in September to update the Declaration to deal with China’s influence in the region.

Following the conclusion of RAMSI, a new agreement was struck between the Australian Federal Police and the Royal Solomon Islands Police Force (RSIPF) in April 2018. In April, Australia also sent three warships into the South China Sea for military exercises and increased the number of US troops “ready to fight” at a permanent base in Darwin.

Australia’s own imperialist interests are creating a more dangerous political climate, and a militarist trajectory in the Pacific.