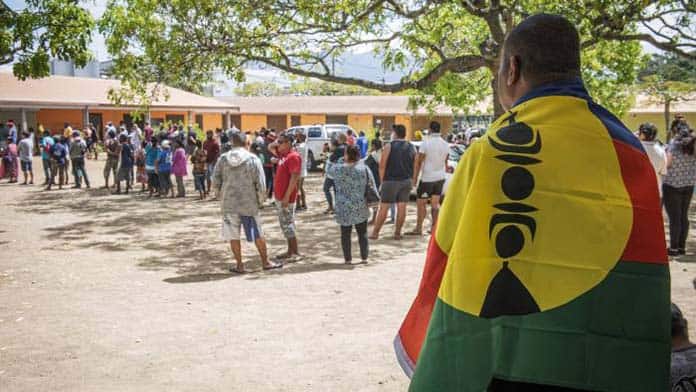 The formal defeat of the second vote for independence in New Caledonia on 4 October was a setback for the indigenous peoples—the Kanak Melanesians. But the increase of 3.4 per cent to 46.7 per cent in favour of independence still has alarm bells ringing in Noumea, Paris and Canberra.

In Noumea, the French settler population (Caldoches) while savouring victory in remaining part of France, know their majority is being whittled away. Polynesian and Vanuatuan minorities, who previously voted French loyalist, shifted to voting with the Kanaky for independence.

A third referendum looms in 2022 under the rules of the Matignon and Noumea peace accords of the 1980s and 1990s, following the armed rebellion of Kanaky peoples in 1984-88.

The Caldoches, who align politically with French right-wing parties and Marie Le Pen’s fascist National Rally, had expected to win 70 per cent in the first vote in 2018 and then use the result to go to Paris and demand the Matignon process be cancelled once and for all.

French President Emmanuel Macron praised the latest referendum result and acknowledged a third referendum “was possible”. When he visited Australia in May 2018, Macron said he wanted France to remain a “Pacific power”, and then flew to New Caledonia to personally campaign for the “No” vote in the first referendum.

After the 2020 vote, Denise Fisher, a former Australian Consul-General to New Caledonia, warned of “strategic implications for France, Australia and the Pacific region.” Any break down in the France-Caldoche-Kanaky agreement was “risking a return to instability on Australia’s eastern border.”

The Australian government response reveals the rotten role of Australian sub-imperialism in the South Pacific. Marise Payne, the Foreign Minister, said the government welcomed the result and that, “Australia values its close relationship with France as a like-minded partner in the Indo-Pacific”. Payne welcomed France’s “significant contribution to regional security and prosperity”, without mentioning French imperialism long history of nuclear testing in the Pacific, including as recently as 1994 at Mururoa Atoll, near Tahiti.

In July 1985, under orders from French President Francois Mitterrand, the French intelligence service DGSE also blew up the Greenpeace ship “Rainbow Warrior” in Auckland harbour, as it prepared to protest to sail to Tahiti to protest French nuclear testing, killing one crew member.

New Caledonia is 1500 kilometres east of Queensland. It accounts for a quarter of the world’s reserves of nickel and its population of 271,000 is 39.1 per cent Kanaky, 34.5 per cent French settlers Wallis Islanders 8.2 per cent with other minorities.

France’s control of New Caledonia since 1853 has been maintained by military force, a French settler population and divide-and-rule over the indigenous Kanak peoples with other imported minorities favoured by the French.

The French contribution to “regional security” has included putting down a Kanaky rebellion in 1878, by killing between 1000 and 2000 Kanaky people, and repressing another rebellion in 1917 with similar numbers killed.

In 1986, France sent thousands of troops to put down another Kanaky rebellion in New Caledonia.

France’s contribution to regional “prosperity” has been to seize Kanaky land for French settlers, bar Kanaky people from working in the nickel mine and refuse Kanaky people French citizenship until 1953.

For most of its history Australia’s ruling class viewed the French empire in the South Pacific with paranoia and hostility because of its rivalry with British imperialism.

Brisbane’s Moreton Bay Courier wrote in November 1853, that the French military settlement of New Caledonia in September that year put the whole of Eastern Australia and New Zealand under threat from “swarms of the moustachioed sons of Gaul.” This is despite Britain and France being allies at the time against Russia in the Crimean War.

As a colonial settler state, Australia’s rulers were more militaristic and pro-empire than their parent power in Britain. Their ultra-patriotism was born out of self-interest, and an awareness that they were on the fringes of empire and could easily be abandoned if Britain’s needs of a European alliance conflicted with those of its empire in the Pacific.

The same has been true of the French settlers in New Caledonia with respect to their government in Paris. Australia too would rather see New Caledonia remain as part of France. It has never supported the right of indigenous peoples in the region. Australia has always opposed the emergence of new small nations in the region as it creates possible areas of influence for hostile powers.

The Australian government now cozies up to French imperialism. This is a logical move in advancing Australia’s contemporary sub-imperial interests in the South Pacific. Australia’s rulers’ obsession with the rise of China means they hope to use any other imperial power they can as a bulwark against it.

The ANZUS treaty has been key to Australia’s efforts to secure US backing for its own imperialist interests in the local region, writes Miro Sandev