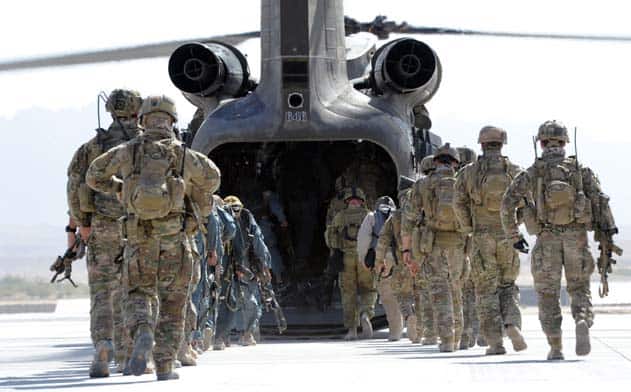 The allegations of Australian special forces (SAS) soldiers committing war crimes in Afghanistan have been around for years. But the Four Corners footage showing an Australian soldier executing Dad Mohammad, an unarmed father, leaves no doubt. The images were sickening.

He went on to say that planting radios and weapons on bodies to justify killings was a regular practice.

In an interview last year the son of an Afghan man allegedly killed by SAS soldiers in 2012 told the ABC, “Our civilians were killed; they killed our elders… wherever they have conducted raids, they have slaughtered people standing.”

The AFP has interviewed Australia’s most decorated living soldier and former SAS member Ben Roberts-Smith over allegations he kicked a handcuffed Afghan prisoner off a cliff in 2012. Roberts-Smith is also under investigation for the summary execution of an Afghan in 2009.

In 2019, the US dropped 7423 bombs and munitions on Afghanistan, an eight-fold increase since 2015. And the civilian casualties keep rising.

According to UN figures, in the first half of 2019, 717 civilians were killed by government forces, including the US, a 31 per cent increase from a year earlier.

For successive Australian governments, Australia’s involvement is an integral part of its imperialist relationship with the other “Five Eyes” countries, the US, Canada, New Zealand, and the UK.

There are 2500 “deployment-ready” US troops stationed at the Robertson Barracks in Darwin, one of the US bases scattered across Australia actively supporting US bombings.

The killing of innocent Afghan civilians by SAS soldiers is part of a wider atrocity—the war crime of Australia’s imperialist intervention in Afghanistan and the Middle East.