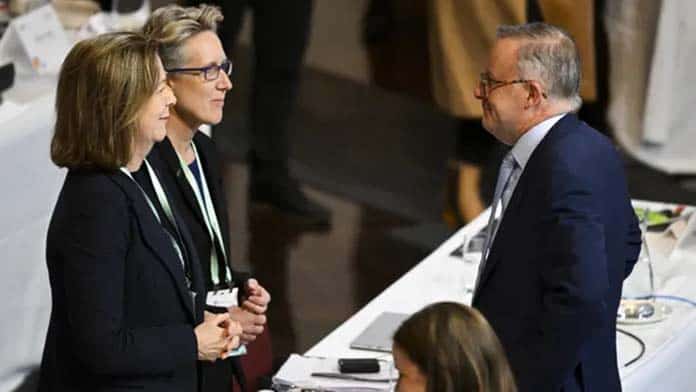 Labor’s Jobs Summit has delivered a deal between the government, business and unions to trade off watering down the Better Off Overall Test (BOOT) for a highly restricted version of multi-employer bargaining.

Unions are essentially trading off the rights of some low paid workers, who may now end up worse than under the Award, in an attempt to boost the wages of other low paid workers in areas like childcare and aged care.

The Jobs Summit was modelled on Labor Prime Minister Bob Hawke’s 1983 National Economic Summit that delivered the Accord between union leaders and the government. The Hawke-style consensus politics that was a trap for unions then is just as much of a trap today.

Karl Marx said that history appears the first time as tragedy, the second as farce. This is certainly the case with the Jobs Summit.

The original Accord saw a still powerful trade union movement agree to collaborate with the employers through preventing strike action and accepting wage cuts.

This was sold as allowing increases in the “social wage”—the redistribution of taxes through Medicare and welfare. At the time, that was mostly a mirage. The Accords decimated the unions’ membership and ability to fight for wage rises.

But they did deliver a historic lift in business profits. This time around the outcomes are far more modest.

The idea of the social wage has disappeared completely.

No increase to JobSeeker is even promised. Labor says it can’t afford new spending because of the Liberals’ trillion dollar debt, yet the stage three tax cuts for the rich are still going ahead, as is $170 billion of spending on nuclear subs.

Business has been demanding a softening of the BOOT since the Retail and Fast Food Workers Union began successfully using it to strike down Enterprise Bargaining deals that paid casual and part-time workers at companies like Coles, Woolworths, McDonalds and Domino’s Pizza millions of dollars less than the Award.

Currently it requires all existing and future workers be better off than under the Award for the relevant industry. Awards are now threadbare safety nets that are far below the conditions in most Enterprise Bargaining Agreements, yet the BOOT still uses them for comparison.

The changes will allow a more “flexible” interpretation, likely allowing deals that leave a minority of workers worse off than the Award in exchange for improvements for the majority. The BOOT will also no longer need to consider conditions for future workers or potential changes to work rosters.

When former PM Scott Morrison wanted to scrap the BOOT with his omnibus bill, Labor’s then Shadow Industrial Relations Minister Tony Burke opposed this, saying it meant “every loading, every shift penalty, every overtime rate can be cut”.

Morrison backed down, but it is now Burke (with the support of the ACTU) who will be watering down the BOOT.

Union leaders have promoted multi-employer agreements as a way to boost wages, in particular in female-dominated low paid industries. The ACTU’s Michele O’Neil says they “would give millions of workers, most of them women, meaningful access to bargaining for the first time”.

While the details of the changes are yet to be finalised, it is already clear they will be modest.

Even union leaders are proposing they apply only in some industries, with ACTU Secretary Sally McManus saying, “Multi-employer or sector bargaining makes sense for funded services, small business and other employers who have been effectively locked out of a system designed for large enterprises.”

Business groups have declared that any increase in unions’ ability to strike across multiple employers crosses a “red line” for them.

Labor has already promised detailed consultation and has no appetite to push through anything business doesn’t agree to.

McManus, who once said that restrictions on the right to strike had gone too far and that bad laws needed to be broken, was singing a different tune at the Jobs Summit. She told the Sydney Morning Herald that, “Industry-wide bargaining had produced pay rises, not industrial action, where it had been implemented overseas.”

But it is precisely the decline in union industrial action that is responsible for the inability to win serious wage rises.

Ultimately the Jobs Summit was a pantomime that will have little effect on cost of living or the real battles playing out for wage increases. To win the wages rises we need there will have to be more industrial action like that seen recently from nurses, teachers and transport workers in NSW.

Unions need to stop handing bosses unnecessary concessions and mobilise and strike, particularly in areas where they still have high density, to fight for wage rises that keep pace with inflation and the cost of living.

Labor’s IR bill is no solution for low-pay crisis

If we want pay rises that at least match rampant inflation, it will take strike action to win them. And effective strike action involves breaking the industrial relations laws, not begging for their reform.