The war for Sydney—genocide and resistance 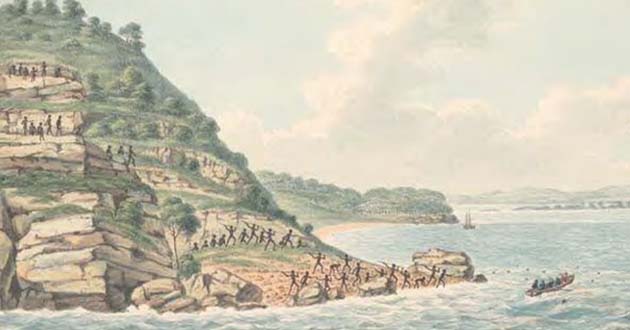 The British occupation of Sydney Cove in 1788, and the brutal tactics of settlers and the military, led to almost immediate Aboriginal resistance, writes Paddy Gibson

When Captain Arthur Phillip planted the Union Jack on Gadigal land at Warrane (Sydney Cove) on 26 January 1788 he proclaimed British sovereignty over half of the Australian continent, New Zealand and surrounding Pacific Islands. This was the biggest single act of land theft in world history. Consolidating control over these lands required a genocidal war which lasted almost 150 years and left hundreds of thousands of Indigenous people dead from murder, starvation and disease.

It was the emerging system of industrial capitalism in Britain that propelled the First Fleet half way around the world. They had two main motivations. Firstly, the British were locked in fierce competition with other imperial powers, trying to exclude rivals from trade routes, markets and access to raw materials. Phillip’s claim was made to forestall the French, whose ships visited Botany Bay just a few days after he arrived.

Secondly, Britain needed penal colonies. The newly independent United States were refusing to accept convicts from England. Transportation was just one form of terrorism used against the poor and dispossessed in Britain and Ireland to enforce a regime of private property. Peasants were being thrown off their lands and forced into the slums of new cities to become fodder for the growing factory system. Seventy per cent of Irish convicts and 60 per cent of the English on the “First Fleet” were first time offenders, most transported for petty theft.

Phillip’s fleet carried about 1000 convicts, 200 British marines and some civilian officials and free colonists. The new colony imported a brutal form of military rule, based on forced labour, arbitrary whippings, rapes and execution.

The contrast with Aboriginal society could not have been stronger. Military surgeon Watkin Tench wrote, “excepting a little tributary respect which the younger part appear to pay those more advanced in years, I never could observe any degrees of subordination among them”.

The initial penal colony was established where the Botanic Gardens are now, an open meadow long maintained by Gadigal people around a fresh water stream that was quickly fouled. At first Aboriginal people were happy to assist the newcomers in finding food and water, and traded for useful tools. But when it became clear that the British wanted exclusive possession, desecrated sacred sites and were quick to use lethal force, local people began to fight back.

They began killing convicts who wandered out of the settlement, following instances of rape and robbery against the Indigenous people. By October, military officer Collins wrote that it was, “absolutely necessary to compel the natives to keep at a greater distance from the settlement”.

This resistance began to pose an acute crisis. The soil both at Sydney Cove and nearby Balmain was too sandy to grow food.

Phillip knew that there was fertile land at the head of the Parramatta River. But in November 1788, there was a large show of force—between 400 and 2000 Aboriginal people armed with spears—at the “brickfields” near the Sydney colony. This confirmed the fears of many officers that there were not enough marines to defend an additional settlement at Parramatta.

Phillip dispatched a letter home saying another 600 marines would be necessary. But colonists were already dying from disease and malnutrition. The future of the colony hung in the balance.

Then in early 1789 a smallpox epidemic hit the Aboriginal people, wiping out more than half the population of the Sydney basin. There is both Aboriginal oral history and academic work suggesting that the British deliberately introduced smallpox as a weapon of war. None of the Europeans had smallpox at this time and the first Aboriginal people affected lived some way from the Sydney colony. Records show that smallpox scabs were kept in vials on a British ship in the harbor. Marines had experience lacing blankets with smallpox in North America.

The initial phase of Aboriginal resistance collapsed following this catastrophe. It was only then that successful farming began at Parramatta, allowing the colony to sustain itself.

The calm did not last long. In 1790, English diaries started carrying stories of a new figure who would lead a black insurgency over the next decade—Pemulwuy, a Bidjigal man.

In December that year, at Botany Bay, Pemulwuy speared John McEntire, Phillip’s personal game hunter, a man hated by Aboriginal people for carrying out numerous rapes and murders. McEntire died five weeks later, but Phillip’s reaction was immediate. He ordered a military party to march to Botany Bay, kidnap and execute men at random and cut off ten heads.

Tench said these tactics were designed, “to strike a decisive blow, in order at once to convince them of our superiority and to infuse a universal terror”. But the marines failed to capture a single person.

Soon attacks began on the new farms that were spreading out from Parramatta to Toongabbie and Prospect. Huts were burned, colonists speared and crops were both raided for food and burned to try and stop colonial expansion.

Phillip first armed the convicts working the farms and then in 1792 ordered that at least three marines must be stationed at every farm house. These troops often lead massacre parties out into the bush. A favoured tactic was to attack Aboriginal camps while people were sleeping, sometimes mutilating the dead bodies. A similar pattern of warfare soon began against Darug people to make way for farming on river flats around the Hawkesbury.

Throughout the 1790s, Pemulwuy appeared at the head of parties attacking farming settlements across the large area now known as Sydney’s Western suburbs and around his traditional country on the Georges River to Sydney’s south. Numerous farms were abandoned as a result.

In 1797, Pemulwuy was part of a group of 100 Aboriginal people pursued through the night north of Parramatta. When the colonists entered the township to rest, Pemulwuy led his group right into the heart of the settlement and started a pitched battle. Five Aboriginal people were killed and Pemulwuy himself was hit by buckshot in the chest and head, captured and shackled. Incredibly, he not only survived, but managed to escape and lead further attacks.

The military regime in Sydney Cove faced another major challenge through the 1790s—convict resistance. From 1788 there were examples of convicts fleeing into the bush and attempting to survive outside the colony. In the 1790s whole groups sometimes ran away, surviving by raiding farms to feed themselves. Those captured were severely flogged or executed.

A small number of the absconders lived or co-operated with Aboriginal people and launched joint raids on settlements. Historians John Maynard and Victoria Haskins have written that in the Hawkesbury:

“By the mid-1790s, there was open warfare in the district. There is no doubt that despite the intensity of the conflict, numbers of white men and youths were attracted to life with Aboriginal people and that the Aboriginal people were similarly willing to accept them”.

One well known example was the freed convict John Wilson. The Judge Advocate Collins wrote that Wilson, “preferred living among the natives to earning the wages of honest industry by working for the settler”.

Some convicts working on government farms also built genuine friendships with Aboriginal people—co-operating as they struggled to beat chronic hunger and avoid the brutality of colonial authorities.

In the late 1790s many Irish political prisoners were transported to NSW. They included veterans of the 1798 uprising, the “United Irishmen Rebellion”. Serious plans began for an uprising that would overpower the military and seize ships to sail back to Ireland. One detailed conspiracy in 1800 involved a plan to co-ordinate with Aboriginal fighters. The ringleaders were betrayed and severely punished.

In this situation, behind every Aboriginal attack military officers believed there was a treacherous convict providing leadership. This was a racist fantasy. But in an effort to decisively crush the black insurgency, they moved to drive a wedge between Aboriginal people and any sympathetic whites.

In 1801, Governor King called for Pemulwuy to be brought in “dead or alive”, along with white absconders William Knight and Thomas Thrush, thought to be fighting with him. At the same time, King gave an order that all Aboriginal people must leave farms in the districts of “Parramatta, the Georges River and Prospect Hill”. Colonists were compelled to use lethal force to remove them if necessary.

New orders also stipulated that when called upon, whites must join militia for punitive raids against Aboriginal people. There was some resistance to this. Historian Grace Karskens gives one example:

“When the Reverend Samuel Marsden ordered Parramatta’s convict servants to join soldiers on reprisal raids, George Caley’s servant refused to go. This man got on well with the Parramatta Aborigines and would not join… Marsden instantly had the man gaoled.”

Within seven months, Pemulwuy was killed by an “explorer” named Henry Hacking. His head was put in a jar and sent to England as a present for Joseph Banks, the famous botanist who had accompanied Cook on his 1770 voyage charting the Australian coast. It has still not been returned to this day.

Pemulwuy’s death was a turning point in the war for Sydney. The centre of guerilla war against the settlers now shifted further out, to the Georges, Nepean and Hawkesbury rivers. The genocide would take on a faster pace as it became clear that seizing land could make colonists a fortune producing agricultural commodities for the world market. In the 1820s the NSW mounted police were created specifically to kill Aboriginal people and protect sheep runs expanding on the plains over the Blue Mountains, exporting wool to Britain’s textile factories.

But, just as in Eora and Darug country, the colonists would have to fight for every new settlement. The resistance of Pemulwuy and many others continues to inspire struggles for justice today. Aboriginal people and all workers have a common struggle against the capitalist system in this country built on genocide.