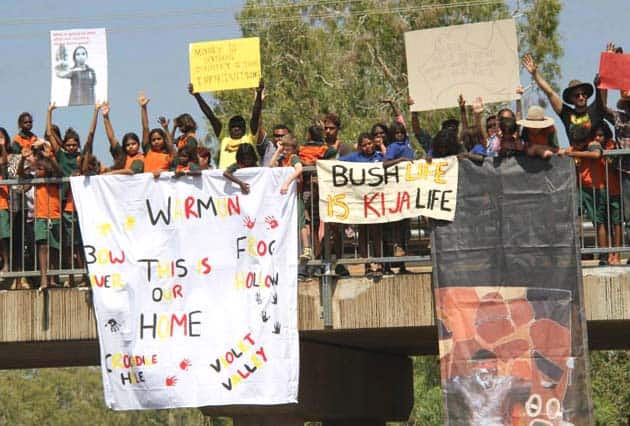 Thousands of people have rallied nationwide in response to the Liberal government in Western Australia making threats to close down 150 Aboriginal communities—and Tony Abbott supporting the move with his racist comments that Aboriginal people living on their land is a “lifestyle choice”. This decision came off the back of budget cuts which saw the Commonwealth withdraw all funding for remote Aboriginal communities right across Australia, passing on responsibility to the states.

The WA government is feeling the pressure. Aboriginal affairs Minister Peter Collier has called for “an end to the national protests”, promising “consultation” on the future of remote service delivery and playing down any plans to close communities.

Solidarity spoke with Mitch Torres, one of the main organisers of a campaign group based in the Kimberley, known on social media as SOS Blak Australia, about the current state of play.

Tell us about SOS Blak Australia in the Kimberley. Did you expect that you would get such a fantastic reaction with protests across the country and internationally? 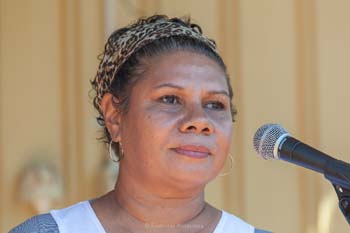 In the first instance, SOS Blak Australia was simply a call to Kimberley people to be proactive in meeting the threat of community closures. We wanted people to get up to make a statement, particularly to their regional leaders, calling on them to come to the table and speak as one voice, because they were operating in silos. This remains our sole mandate.

We did not think it was going to be a movement, certainly not on the scale we have seen. With the first “call to action” there was a big response in our region. We saw 1000 people march in Fitzroy, 600 in Broome, 200 plus people marching in places like Kunnanurra, One Arm Point, Derby, 100 in Halls Creek. For people in more remote areas who couldn’t make these events, they were posting photos with signs like “my community is my home” to our Facebook page in a virtual protest.

There was also an amazing response from right across WA and the country. We are so proud and grateful. Some of these protests became a platform to also raise broader issues of the hardships being suffered by Aboriginal people. We understand what is going on in Redfern with the Tent Embassy there, the Nyoongar Tent Embassy, the campaign coming from Grandmothers against forced removal of children—a continuation of the stolen generation. We understand that Aboriginal human rights across the board are continually being threatened and how it’s connected—linguicide, ecocide, genocide. These things are constant.

People new to activism might think, “ok I’ll do one or two marches and that’s enough”. But our supporters need to know that we absolutely need to continue to push and focus our efforts on the closure of Aboriginal communities, the threat that our people will lose their homes. We are still going up the slope of the hill. You can’t give up just because they have promised some talks. We still have not reached a moment where people can say, “yes, my community is safe”.

What is taking place with the negotiations with the government?

It isn’t clear what their reforms to service delivery will actually look like. Our leaders have not even sat at the table with government yet.

Here in the Kimberley we had a fantastic meeting, forming an alliance known as Kimberley Futures. This is all the leaders of organisations working everyday at the coalface, who know exactly what the issues are. They are the resource agencies, the policy makers, the representative bodies including Kimberley Land Council, Kimberley Medical Service, Kimberley Aboriginal Law and Culture and many others, a real collection of the people who come from and work on the ground. The government has called for nominations for four community representatives from each region. We want Kimberley Futures to be able to nominate our representatives, but the government have put out a call for nominations and want to pick and choose in this process.

Next Friday, the third “call to action”, we are focusing on the town of Derby. There will be a march there and we will have another gathering of Kimberley Futures to strategise a way forward. The public pressure and support must continue, we haven’t even got to the table yet.

Even before this announcement, remote communities were being squeezed. When ATSIC was shut, the Community Development Employment Program closed down, policies like the NT Intervention, which was announced eight years ago this month, were all pushing people off their land.

Yes the same has been happening in the Kimberley. The NT Intervention was based on a lie [about pedophile rings in remote communities] and we are seeing the same fear campaign here now from Colin Barnett about the safety of children. It really hits at the core of people’s souls. How must our black men feel?

The Police Commissioner has gone on TV saying “my police can’t sleep because they are worried about the safety of kids in remote communities”. But the Commissioner, the Child Protection Minister Helen Morton, they can’t name which communities they are talking about. Our people are saying, “we don’t know anything about this happening in our community”, but they still have these allegations hanging over their head. Is any other section of the community put under this innuendo?

The Commonwealth has pulled out of funding remote communities right across the country. [In the latest budget] the NT in particular has been put under the microscope, with something like 300 communities potentially facing essential services cuts, with responsibility handed to the NT government.

So we can’t just be concerned with our own backyard—this is a national process. It is a hard political environment nationally and globally, but we need to create a space for having that discussion. Keep going. Keep marching.