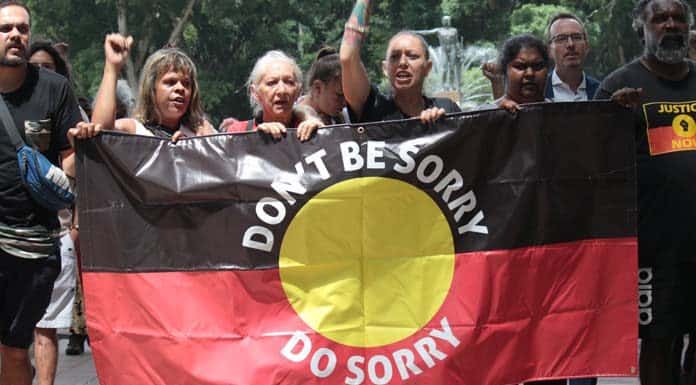 On 13 February there were a host of government sponsored events to commemorate ten years since Kevin Rudd gave his official apology to the Stolen Generations.

But a growing chorus of protest from Aboriginal families broken up by contemporary “child protection” agencies has pushed the issue of continuing forced removals into the national spotlight.

Aboriginal children are being taken away into foster care in numbers unprecedented in Australian history. These removals take place in raids using police. Newborn babies are often taken straight from the hospital.

Despite being less than 5 per cent of the child population, Indigenous children make up more than one third of the numbers in foster care and are more than ten times more likely to be removed from their families.

Overwhelmingly these children are removed for “neglect”, rather than physical or sexual abuse.

The Bringing Them Home report in 1997 explained that, “social inequality is the most direct cause of neglect”. Problems such as homelessness, chronic hunger, substance abuse and family violence result from the intense poverty and oppression experienced by Aboriginal communities.

More than $1.5 billion is spent every years removing Indigenous children from their families and keeping them in “out of home care”. Meanwhile, the government refuses to fund employment programs, build housing or maintain the basic services in Aboriginal communities that are taken for granted by mainstream Australia.

Child protection departments are rife with racism against Aboriginal people. Entire families and communities are branded as “dysfunctional” just because they are black. Despite an “Aboriginal child placement principle” in child protection law, the majority of Aboriginal children removed are placed away from their own family network.

This racism has hardened over the past decade, with explicitly racist policies like the Northern Territory Intervention, introduced by John Howard in 2007 and continued by the Rudd Labor government and now Turnbull. The Intervention has encouraged the idea that Aboriginal families need to be broken up and controlled “for their own good”.

On the Apology anniversary, a protest of 150 people organised by Grandmothers Against Removals Sydney marched to NSW Parliament to demand an end to continuing stolen generations

“I worked for 19 years as a family support worker. I first became a victim of the system when they took my four grandchildren. Then this racist system walked into the school and took three of my own children away. I knew from that day on I had to stand up and fight… I got my children back. But the system needs to be dismantled.”

“Months later (after Rudd’s apology) 14 police officers and an Aboriginal social worker knocked on my father’s door in the middle of the night and ripped me out of his hands. They said, ‘hug your father one last time, you have to go’… I went to 13 different homes. What we must change is a system where the next Aboriginal baby who is born is automatically profiled for removal, just like I was profiled with a caseworker appearing at the hospital straight away”.

In Alice Springs, a protest was led by Aboriginal grandmothers demanding an end to the removals and the abuse and torture of Aboriginal children in foster care and juvenile detention centres like Don Dale.

To mark the anniversary of the Apology, Labor announced that a national summit on First Nations children will be held within 100 days of forming government. They have also committed to legislating for an Indigenous representative body, or “voice to parliament”.

But Aboriginal people don’t need more “consultation” or “advisory” roles—they urgently need control of their own communities, children and land.

And Labor must unequivocally apologise for their role implementing and extending the NT Intervention and commit to repealing all Intervention laws and policies.