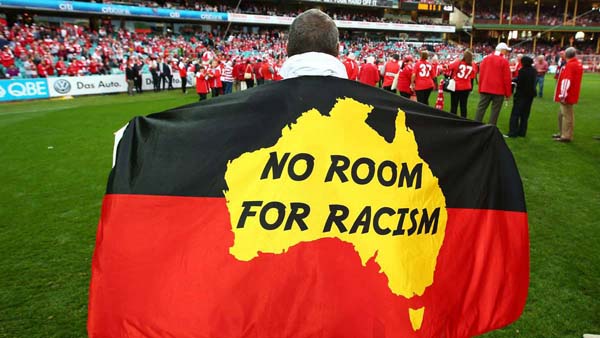 The booing of Sydney Swans star Adam Goodes has exposed the faultline over racism in Australia. When the racist targeting drove Goodes to contemplate an early retirement, we saw a tidal wave of support for him from across the country.

Goodes, the Australian of the Year for 2014, became immediately unpopular with every racist in the country for using that platform to speak out about Aboriginal issues and dispossession. The persistent targeting of Goodes by football fans began last year, and has intensified through this AFL season.

The AFL did nothing to defend Goodes and stop the booing. It took a “war dance” by Aboriginal team-mate Lewis Jetta, challenging the crowd in Perth, to bring the issue to a head.

There was an outpouring of support for Goodes, with fans flocking to the hashtag #IStandwithAdam. The following weekend many made home-made signs in his support and took Aboriginal flags to games.

Aboriginal players from both the AFL and NRL did their own celebratory dances and players from across the league displayed red, black and yellow colours in solidarity with Goodes.

This push from below forced politicians, the AFL Commission, and even major corporations including Qantas, NAB and Lendlease to come out in support.

Even Tony Abbott, while refusing to be drawn on whether the treatment of Goodes was racist, added his voice to say, “The last thing we want in Australia is anything, anything at all that smacks of racism.”

The AFL, while trumpeting itself for its celebration of Aboriginal players, has always been slow off the mark to challenge racism.

It took the actions of Aboriginal player Nicky Winmar in 1993 for it to sit up and take notice of the racism in its supporter base. Winmar lifted his jersey, pointed at his skin and told the crowd, “I’m black—and I’m proud to be black!” following a torrent of racial abuse from Collingwood fans.

The AFL realised that it had to address club and supporter racism, as it was drawing on larger numbers of Indigenous players, scouring remote areas in WA and the NT for football talent.

Today more than 10 per cent of players in the league are Indigenous.

Many people see football fans and the working class as the source of the racism in sport.

Yet despite politicians’ and the ruling class’s condemnations of racism in cases like Goodes, it is their policies that breed and sustain racist attitudes towards Aboriginal people, as well as Muslims, refugees and immigrants.

The Northern Territory Intervention, supported by both Liberal and Labor, has created a formal system of racial segregation in the NT, justified by lies about “pedophile rings”.

Earlier this year Colin Barnett, Liberal Premier of WA, justified plans for the further closure of Aboriginal communities by saying, “Those communities, 273 of them, are not sustainable into the future. They cannot look anyone in the face and guarantee the safety of little boys and girls.”

Abbott supported him with his disgraceful comment that living on a remote community was a “lifestyle choice”, displaying racist contempt for Aboriginal culture.

Anti-Aboriginal racism is built into a social system based on their dispossession. Mining companies have made billions of dollars through desecrating Aboriginal lands, often in defiance of the local Aboriginal population.

The ruling class also uses racism to divide the working class, and to legitimise imperialist wars overseas. But uncontrolled racism can have severe costs for the it.

By the 1960s, the White Australia Policy had become a barrier to trade and diplomatic relationships with the newly-independent Asian ruling classes.

Australian racism and exclusion towards southern European migrants fuelled industrial militancy amongst migrants workers in the 1960s and 1970s, culminating in the strike at Ford’s Broadmeadows plant in 1973.

The ruling class responded with limited anti-racist policies. As Prime Minister Malcolm Fraser set out to redefine Australian nationalism so that it could incorporate migrants from outside Britain.

This brought the Racial Discrimination Act, multiculturalism, and the provision of real, though limited, services to immigrants—English classes, SBS TV and radio and funding for migrant welfare organisations.

Multiculturalism was aimed far more at winning a commitment that immigrants be “loyal” Australians, than at breaking down entrenched racist attitudes.

We are seeing a similar attempt to incorporate and assimilate Aboriginal people.

Aboriginal people are being encouraged to embrace “self-reliance”, the free market and the conservative values of Aboriginal elites like Noel Pearson and Warren Mundine.

Abbott’s support for the Intervention and community closures sits alongside a token commitment to “recognise” Aboriginal people in the constitution – while offering them no rights.

Politicians and the ruling class are willing at times to oppose explicit and outright racism. But they will never be consistent opponents of racism—their system relies on it.