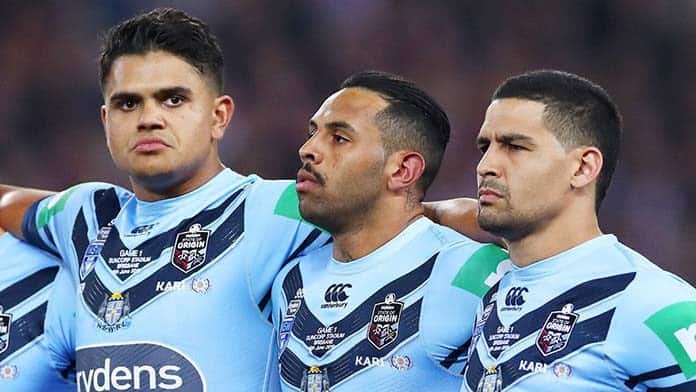 Indigenous players caused a storm by refusing to sing the Australian national anthem during the opening State of Origin rugby league game in Brisbane in early June. This echoed the actions of US footballers “taking a knee” during the playing of the US national anthem in protest against police brutality.

“The anthem doesn’t represent us as Indigenous people… We have to change it”, NSW’s Josh Addo-Carr told the Sydney Morning Herald.

Four Indigenous players spoke out publicly before the game to support the protest: NSW’s Cody Walker, a South Sydney player, Addo-Carr, from Melbourne Storm, and Latrell Mitchell, who plays for the Sydney Roosters. In the Queensland team, Will Chambers, also from Melbourne Storm, said he would refuse to sing.

In all 11 players stood silent during the anthem, with a number of players with Pacific Islander or Maori heritage joining the boycott.

Indigenous players also stood silent in February this year during the NRL’s Indigenous All Stars vs Maori All Stars game.

Walker criticised the lyrics of the anthem, telling Channel 7, “We aren’t young and free. We’re the longest-living culture in the world.”

Indigenous rapper and comedian, Briggs, has produced a video that points out a large number of problems with the anthem. “Free” hardly fits for an Indigenous population that is the most incarcerated in the world. Others have pointed out that the song reflects the racist white Australia of the time it was written.

The anthem controversy comes just a few months since nine-year-old Queensland girl Harper Nielsen, who is non-indigenous, was threatened with suspension because she refused to stand for the national anthem at a school assembly.

Harper said, “It says ‘Advance Australia Fair’ and when it was originally written it meant advance Australia for white skin people.” She added, “And when it says ‘we are young’ it means that it ignores the Indigenous Australians who were here before the English for over 50,000 years.”

Harper’s protest saw an extraordinary attack on her by racist Senator Pauline Hanson calling her a “brainwashed brat” who should be kicked out of school. Tony Abbott and Queensland Liberal MP Jarrod Bleijie also publicly attacked her.

Politicians from both Liberal and Labor have been quick to suggest cosmetic changes such as replacing, “young and free,” with “strong and free.”  But small changes in the wording are not going to fix the problems with the national anthem. The idea that a different national anthem can be “inclusive” is mistaken.

The national anthem is designed to bolster nationalism and the idea of national unity. No matter what national anthem is written or sung it would inherently recognise an Australia that is based on invasion and Indigenous dispossession and the exploitation of the working class.

Nationalism is designed not just to cover up the realities of Indigenous oppression, it masks the fundamental class divide in society between the ruling class and the working class majority.

There is no common national interest. The interests of bosses and workers are diametrically opposed. Nationalism works to exclude all those outside the nation, encouraging the idea that the “other” is fundamentally different. It encourages racism at home and abroad. This leads to racism against Indigenous people and those from other nations, as well as migrants and refugees.

Australia’s national anthem used to be “God Save The Queen.” “Advance Australia Fair,” only became the national anthem in 1984, as part of an effort by the then Hawke Labor government to rejuvenate Australian nationalism. Nationalism only got worse under the Howard government, which forced schools to have a functioning flagpole to fly the national flag, along with singing the anthem.

Playing the national anthem at sporting events is also a recent phenomenon.

They want us to sing the national anthem in the hope we will identify more with our rulers than with each other. It is why non-indigenous rugby league players should join the Indigenous players’ boycott of the anthem

None of us should sing any national anthem and the sooner it vanishes from schools and sporting events, the better.

Canberra 457 workers’ dispute shows how to fight for rights

Anti-457 campaign is an attack on foreign workers