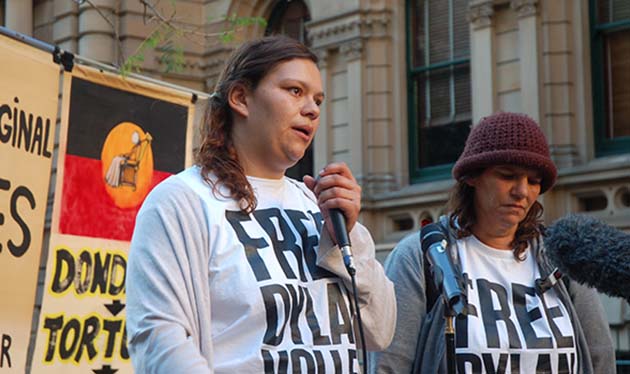 More shocking evidence of abuse of Aboriginal children at the hands of both the “juvenile justice” and “child protection” systems has emerged through Royal Commission hearings in the Northern Territory.

The Commission, initiated by the Turnbull government in response to the exposure of torture in the Don Dale youth detention facility by ABC’s Four Corners, began public hearings in Darwin on 11 October. Commissioners have also traveled to remote Aboriginal communities to take evidence.

In Maningrida, the Commission was told about repeated abuses of a local youth in Don Dale, including one incident where, “he’d been tied spread-eagled and upright and left for two hours. When he once asked an officer for a glass of water, the officer urinated in the toilet and made him drink it.”

The NT Children’s Commissioner has presented documentation of abuse of children threatening self-harm, including one who was stripped and left naked for 11 hours and another who was locked alone in a cell for four days before being seen by a mental health worker.

Kimberley Hunter spoke in a closed session in Alice Springs about his two year experience as an Aboriginal worker with the Department of Children and Families (DCF). He gave an interview to CAAMA radio afterwards, saying:

“It was a hit and run process, [DCF] would go out there like it was guerrilla warfare, often with an escort of police carrying guns and pepper spray. Children were removed immediately without dialogue or conversation.”

“There was no support for children brought in from remote communities or anywhere, no measures in place for [them] to be consoled… the numbers just continued to grow.”

In Maningrida, families spoke of their experiences being raided by police to remove children. Local leader Baru Pascoe demanded support for locally controlled programs to support families and make decisions about child welfare.

The same demands for self-determination and funding have been heard in every remote community visited by the Royal Commission. At Mutitjulu, the community adjacent to Uluru and the resort town of Yulara, there was anger and threats of protest.

Ngaanyatjarra Aboriginal Corporation chairman Rameth Thomas said, “On one side of the rock we are in poverty and the other side is some sort of dream world… if they don’t start listening to us we will close the rock”.

Protests were held in Alice Springs, Darwin and Sydney to coincide with the first Royal Commission hearings. The Sydney rally was addressed by Kirra and Joanne Voller, sister and mother of Dylan Voller, an Aboriginal youth tortured in Don Dale.

Dylan was first put in prison in 2008, after being removed from his mother by DCF. The family are fearful he won’t be able to speak freely to the commission, because he is still in prison, being guarded by many of the same people who tortured him in Don Dale. Joanne and Kirra also travelled to Adelaide and Melbourne to support protests against police brutality and deaths in custody.

Kirra said in a press statement:

“We need to keep pushing if we are going to see the change we need, we can’t rely on the Royal Commission. Rather than forcibly removing kids, provide education and help families, because those programs work… kids definitely shouldn’t be in prison at all”.

Inside the Commission hearings, there was also widespread cynicism about the process leading to meaningful change. Peter Callahan SC, Senior Counsel assisting, pointed to 50 reports in recent years examining similar issues that had largely been ignored.

Pat Anderson, author of the 2007 Little Children Are Sacred Report said, “All this country ever does is talk about blackfellas… You have a round table or do a report, it’s a momentary feel good moment and then it’s all left. It’s got to stop”.

Anderson’s report was disgracefully misrepresented by the Howard Government in 2007 and used as a pretext to launch the NT Intervention. Federal Labor have been rightly scathing of Liberal Minister for Indigenous Affairs Nigel Scullion over his inaction over the abuse in Don Dale.

However, the ALP remain committed to the Intervention, now known as “Stronger Futures”, a policy of explicitly racist controls that laid the foundations for the current crisis in youth detention and child removal.

The torture will not stop until protests grow into a movement capable of forcing an end to the removal of Aboriginal children into prisons and foster care, stopping the NT Intervention and putting communities in control of resources to build their future.