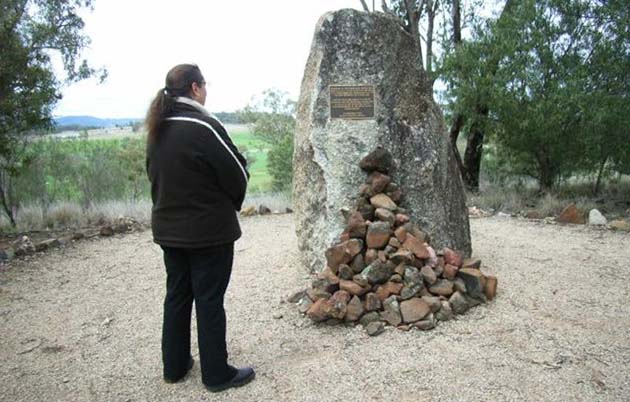 Late in the afternoon on Sunday 10 June 1838, twenty-eight Wirrayaraay Aboriginal men, women and children camping peacefully next to station huts at Myall Creek in northern New South Wales, were brutally slaughtered by a gang of stockmen led by a local squatter.

Because there were two trials of the men responsible, it is perhaps the most well documented atrocity in the long, genocidal war against Aboriginal people that stretched into the 20th century.

It is also significant because it is the only time in Australia’s history that white men were arrested, charged, convicted and hanged for massacring Aboriginal people.

It is telling that the one person who escaped being charged was the person who led the massacre—John Henry Fleming. John Fleming was the son of a large land-holder and was superintendent of three properties owned by his older brother Joseph.

In the first trial, the jury found the 11 charged men were not guilty within 15 minutes.

But rather than accept the verdict and release them, the then NSW prosecutor John Plunkett immediately charged the 11 with the killing of an Aboriginal child, Charley, in the massacre.

In the second trial, the jury found the seven were guilty (the other four were remanded to a later date). Despite petitions for clemency from a large majority of the jurors of the first and second trials and a third from 450 residents, the seven were hanged in Sydney on 18 December 1838.

The colonial elite went to enormous lengths to subvert the trials. The boss of the Myall Creek station, Henry Dangar and Magistrate Robert Scott, another wealthy landholder (Magistrates of the day were all wealthy landholders), called a meting of local property owners to form the “Hunter River Black Association” to raise money to pay for the defence of the 11 men.

Robert Scott even visited the men in prison to tell them to stick together, not give evidence against each other and they would be acquitted.

The media also played its role. The Sydney Herald strongly supported the charged men, saying “The whole gang of black animals are not worth the money the colonists will have to pay for printing the silly court documents…”

The media of the 1800s is not so different from the 2000s. The Herald was owned by Alfred Ward Stephens, a wealthy landowner, and a close friend of Magistrate Robert Scott.

In the second trial, the Black Association organised a boycott of jurors to try to prevent a jury being empanelled. The trial went ahead by the judge ordering the Court Sheriff to draw enough people “off the street” to make up the jury.

Even then, one of the people pulled off the street was William Humphreys, who had been a juror in the first trial and seemed to be a deliberate plant to rig the jury in the second trial.

As if this wasn’t enough, on the morning of the trial, the police also interfered (probably at the behest of the Black Association) by arresting one of the main prosecution witnesses, William Hobbs, supposedly for non-payment of debts.

In spite of these efforts, the second jury found the seven men guilty.

It is an astonishing story and deserves to be told. It has mostly been remembered as a triumph for the law and the justice system.

Two books concerning the massacre have been recently published. Murder at Myall Creek—The trial that defined the nation focuses on the prosecutor John Plunkett and the judicial details and intrigues of the trial itself. Tedeschi (himself a barrister and former NSW prosecutor) describes Plunkett as, “possibly our most important advocate of human rights of all time.”

Justice in the courts?

Tedeschi writes, “Those trials stand as an early demonstration that Australian courts had the capacity to protect the weak and disenfranchised … including those on the margins of society.”

Actually, the truth is quite different.

As Tedeschi says only a few sentences later, “It [meaning the trial] would never happen again during the colonial period or even after the federation of Australian states in 1901.”

Such was the backlash of the colonial elite, a trial of people for the mass killing of Aboriginal people would never happen again.

The four who were not hanged never even faced a trial. Davy, the Aboriginal stockman who had witnessed the massacre and was scheduled to give evidence, disappeared, almost certainly murdered by Dangar.

John Henry Fleming not only avoided arrest for his leading role in the massacre, in 1882 he became a magistrate.

The second book, Denny Day: The life and times of Australia’s Greatest Lawman, concerns the Police Magistrate Captain Edward Denny Day, who was responsible for rounding up and arresting 11 of the 12 who were responsible for the Myall Creek murders. As mentioned earlier, the massacre leader, Fleming, avoided arrest, by fleeing the area, and apparently hiding on his father’s property near Sydney.

The new Governor of New South Wales, Major Sir George Gipps called on him to investigate and arrest those responsible for the massacre after he had established a reputation by hunting down bushrangers.

The position of police magistrate had been created in 1833 to “keep the peace”. They were more like a frontier police officer than a present-day magistrate. They were charged with tracking down criminals and suppressing “tumults, riots, breaches of the peace, public nuisances, etc.”

After the arrest of the 11 Myall Creek killers, Day walked them 200 miles in chains to Muswellbrook and then by cart to Sydney. Gipps asked John Plunkett to “personally prosecute the trial.”

Denny Day’s story of the investigation and arrests of the Myall Creek murderers should be told. In the story of the trials and convictions, there are individual stories (not least the second jury) of the courage to stand up to the establishment and public opinion that was whipped up by the landowners and the press.

But the real story lies in the fact that Myall Creek is such as exception.

Smyth’s book does a better job of explaining the particular role of the landholders in organising the extermination of Aboriginal people. Too often, the genocide is presented as a frontier war of “white vs black”, rather than a campaign by the colonial elite, the emerging ruling class, to extend their wealth and power and impose a new social system on this continent.

The book provides important context, which shows this class power in action. Two days before the massacre, eighty-two “Colonists, Landholders and Proprietors of stock” sent a petition to Governor Gipps saying the time had come for coercive measures against the “outrages” of the blacks. Two of the signatories were the bosses of the two of the convict stockmen among the Myall Creek murderers.

In 1838, it did not take long for the real lesson of the Myall Creek trials to become established. Earlier that year, there had been an even worse massacre of up to 300 Gamilaraay Aboriginal people at Waterloo Creek (both Waterloo Creek and Myall Creek are close to each other and close to Moree.) Denny Day was also ordered to investigate this massacre too.

But in the face of the social backlash to the Myall Creek trials, by early 1839 Governor Gipps backed off from the investigation. Day sent statements concerning the massacre to the Colonial Secretary but nothing happened.

When Day died in 1876, there was no mention of Myall Creek in any obituary; it was already being erased from history.

Both books in their own way try to paint the Myall Creek trials as a celebration of the glories of Australian law. Tedeschi writes that Myall Creek “stands a beacon of humanity and interracial justice to illuminate the way for Australia to develop as a civilised nation.”

Myall Creek is certainly a beacon—but it is to the abject failure of the law. The massacres went on until 1928. And the deaths and dispossession continue. For a brief moment, it looked like the law might apply equally—but the system quickly reasserted itself. The law and the courts were the playthings of the rich and powerful. Even at Myall Creek it was the convict employees who were hanged.

The same is true of more recent examples from the Royal Commission into Black Deaths in Custody, the death of Cameron Doomadgee on Palm Island, the Mabo decision and Native Title; the death of Ms Dhu; the shooting of Mr Doolan in Cowra, and the never-ending deaths in custody.

Both the books throw some more light on the events surrounding the Myall Creek murders—but they are seriously flawed. There is nothing to cheer about; no justice system to celebrate. There is no justice to be had from the police and the courts. They are part of the state that still stands guarantor for the powerful and the privileged—the including the landowners and the mining companies. Justice awaits the overthrow of that system. Read and despair.

The definitive story of Waterloo and the Myall Creek massacres is still Waterloo Creek: The Australia Day massacre of 1838 by Roger Millis (UNSW Press,1994)—but don’t expect it to be on the shelves of your local bookshop.

On Invasion Day, this year, the Gamilaraay people are leading a march in Moree to mark the massacre and protest continuing racism and injustice inflicted on Aboriginal people.