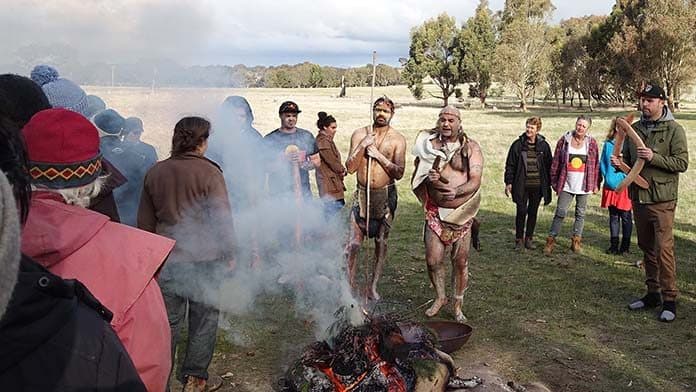 Across the country, the Labor Party is making commitments to negotiate treaties with Aboriginal people. In Victoria, the Andrews government passed legislation in June committing to treaty negotiations and outlining a basic framework for consultations.

Also in June, in the Northern Territory, the Gunner government signed a Memorandum of Understanding with NT Land Councils, during celebrations marking 30 years since the historic Barunga Statement. Although it called for a treaty and then Prime Minister Bob Hawke promised to deliver one, he never made good on that promise.

With the promises of a treaty, and its commitment to support the Uluru statement, Labor is carving out a real point of differentiation from the blanket “no” from the Liberals. The recent huge Invasion Day protests, and consistent agitation around issues like child removal and torture in youth detention centres have helped push this change.

But despite the promises, Labor has made no commitments to end the NT Intervention or return the resources and control that they helped to rip from communities.

In the NT, in the same month Gunner signed an MOU for a treaty, his government also lifted a moratorium on fracking, opening up vast swathes of Aboriginal land to destruction. In Borroloola, residents were told their drinking water was contaminated with heavy metals and ABC 730 ran a major investigation showing the water in many other remote communities was also unsafe. One hundred per cent of kids in NT prisons are now Aboriginal, despite the recent Don Dale Royal Commission.

Neither the Victorian nor the NT governments have made any commitments to land rights, or to recognise the sovereignty of First Nations, two central issues which have driven the treaty campaigning.

The ABC reported Michael Gunner’s view that, “instead of a one-off reparation paid out for past injustices and for Aboriginal land and resources, a treaty could mean that the Government provides money for education or housing, and the community takes responsibility for how it is delivered locally.” So a treaty would deliver nothing more than basic citizenship rights that are currently denied to Aboriginal people.

In Victoria, Meriki Onus, a spokesperson for the Djap Wurrung embassy set up to protect sacred trees west of Ballarat, told 3CR radio that the treaty process appeared to be, “just another way to configure welfare in Victoria”.

No trees, no treaty

The Djap Wurrung embassy is directly confronting the hypocrisy of the Andrews government, as traditional owners and supporters battle to defend a rich cultural landscape set to be destroyed by a major highway expansion.

The embassy camp has been set up to defend woodland, including trees culturally modified prior to invasion. On NITV, Djap Wurrung lawyer Jidah Clark explained there are “beautiful big redgums… that through burning practices, have grown with big great hollows at the bottom of them”, that were utilised for a variety of purposes.

Djap Wurrung women speak of the particular significance of the trees for birthing children over many generations. The roadworks would also destroy hills surrounding the trees, which hold an important place in creation stories.

Meriki Onus, explained the embassy slogan “no trees, no treaty”:

“If the Victorian parliament, if the Labor Party want to right the wrongs of the past, don’t chop these trees down. We should have this land to use. We have lost so much due to the violence, massacres, stolen generations, dispossession… assimilation. And these trees hold our Djap Wurrung stories. Why would they rob that of us? What good is a treaty if we can’t have that?”

The protests have forced a halt to road works until at least 4 August while a new cultural assessment is underway. A campaign appeal has raised almost $20,000. But the pressure to bulldoze the trees will be immense, with more than half a billion dollars invested in the Western Highway expansion, to increase the capacity for trucking companies to carry freight.

Protestors have dug in for the long haul. On Tuesday 10 July a delegation from Victoria Trades Hall Council visited the site to meet with Elders. A union ban on the development would be a major boost for the campaign.

If the treaty process is going to deliver anything more than a piece of paper that recognises dispossession, there will need to be a serious fight.

By Padraic Gibson and Jasmine Ali