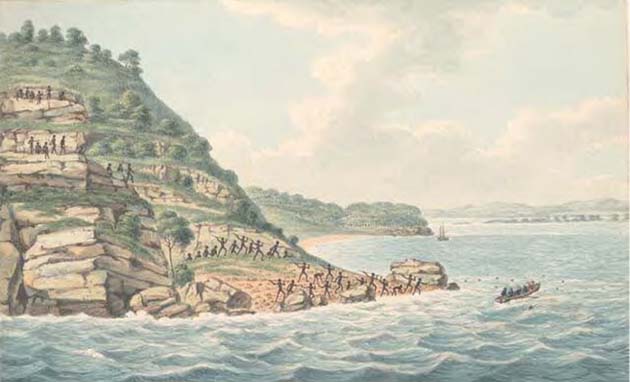 On Anzac day this year, Aboriginal activists in Canberra attempted to march behind the official parade of soldiers and veterans. The protesters carried signs commemorating massacres of Aboriginal people during the “frontier wars” that accompanied the invasion of this continent.

Police lined up to stop the Aboriginal protest from reaching the Anzac parade. It was a stark symbol of one of the ideological battle-lines taking shape as the Abbott government prepares for a barrage of militarist propaganda to accompany the 100 year anniversary of the Gallipoli landings in 2015.

Hundreds of millions of dollars are being spent to celebrate what we are told was the “birth of the nation” on a far off beach in Turkey.

Meanwhile, the war that really forged the nation, the genocide of Aboriginal people to make way for an expanding settler-capitalism, continues to be ignored.

Between 4000 and 5000 monuments to overseas war dead stand across Australia. Aside from a handful of small plaques, thousands of frontier battlegrounds in this country are evidenced only by the bones of Aboriginal victims lying in unmarked graves.

This brutal history cuts directly against the celebratory nationalism being promoted through Anzac commemorations.

The capitalist elite that sent young working class men and women to die in foreign battlefields to defend imperialist interests are precisely the same people who organised the systematic slaughter of Aboriginal people in this country.

It was a slaughter that forms the basis of much of the wealth controlled by the rich in Australia today.

As historian Tony Roberts argues: “when you know who owned the stations on which Aboriginals were killed and the names of the politicians who knowingly allowed it to happen, you also know the ‘who’s who’ of colonial Australia…this is why some people still want this history to remain hidden”.

Historian Henry Reynolds, in his book Forgotten War, uses the year 1885 to demonstrate the contradiction between the Anzac myth and the realities of frontier conflict.

In the National War Memorial’s honour roll in Canberra, 1885 is the year that supposedly marks the beginning of Australia’s participation in warfare, with five soldiers from NSW listed as casualties of the Sudan conflict. None of them were killed in battle. They all died of sickness, mostly on the long sea voyage. They were in the Sudan as part of a counter-insurgency war against indigenous resistance to British colonialism. They served no useful military purpose and spent a lot of time guarding a railway line.

But in 1885 there was a very real war raging across the northern half of Australia. It was a continuation of a war started in 1788 when Arthur Phillip began the military occupation of Sydney Cove.

In the four months that the NSW troops were in the Sudan there were 13 settlers killed by Aboriginal fighters in the north of Queensland. There were 30 patrols of the Queensland Native Police, death squads designed to kill and otherwise terrorise Aboriginal people refusing to leave their lands.

Queensland newspapers compared the Sudanese insurgency to that being waged by Aboriginal people against pastoral expansion across the colony.

At the same time, 17 Aboriginal people were massacred on Glen Helen station in Central Australia. Such attacks would characterise the whole career of murderous constable William Willshire, who had recently established a police station in Alice Springs.

In June 1885 the South Australian Register published a letter from a Dr Robert Morice, a colonial surgeon and nominal “protector of Aborigines” based in Darwin about frightful massacres there the previous year.

He said “not less than 150 Aborigines had been killed, a great part of them women and children”. Modern estimates put the figure well above 200.

Four miners had been killed on the Daly River to the South of Darwin. The Aboriginal people responsible were captured and tried. But that didn’t stop the incident being used as an excuse for mass slaughter to displace and terrorise the tribes of the region.

The slaughter was organised by police inspector Foelsche, a notorious butcher who served as a senior officer in Darwin for more than three decades.

Foelsche gathered four private posses comprised of squatters and other settlers, along with a massive police party. He sought permission from the government in Adelaide for bloodshed and plied the men with government funds and ammunition.

Foelshe issued orders to “bury the remains of the Natives”. Posses were sent east, west and south, over an area stretching many hundreds of kilometres in what the inspector himself described as a “nigger hunt”.

In this same year, Foelshe was busy co-ordinating the slaughter of tribes throughout the vast Gulf of Carpentaria. Tony Robert’s historical work demonstrates clearly how this killing was done to facilitate the needs of a rapidly expanding settler capitalism.

In 1881 the entire Gulf region, an area the same size as the colony of Victoria, was leased to just 14 landowners. All but two were wealthy businessmen and investors, absentee landlords from the eastern colonies.

One of the three principle owners of one company was Queensland Premier Sir Thomas Mackalray. The South Australian Minister of the Northern Territory at the time, Sir Richard Baker, was chairman of another private pastoral company handed a lease.

The leases were granted under strict stocking rules—use the lease or it would be withdrawn. Granting new leases in the Gulf Country was seen as a way of generating economic growth—ensuring a steady stream of revenue into South Australian government coffers, along with profits for the business and political elite in the colonies who owned the stock.

To facilitate this there was wholesale slaughter of the Aboriginal people in the area. From evidence discovered during his research, Roberts puts forward what he calls a conservative estimate of 50 separate massacres in the Gulf country to 1910.

Approximately 15-20 per cent of the local Aboriginal population was killed in violent attacks. Many more starved or had their lives otherwise destroyed in the wake of this ethnic cleansing.

“Adults and children received a bullet to the brain, while babies—whether injured or not—were held by the ankles ‘just like goanna’, their skulls smashed against trees or rocks.”

One character involved in this slaughter was Sir John Cockburn, a minister for the NT in the South Australian parliament. In 1886 Cockburn dispatched a police party that perpetrated massacres at Malakoff Creek, “with a death-toll of 64 men, women and children in one camp alone”. He went on to become the Premier of South Australia just three years later.

Another was Sir John Downer, one of the founding fathers of Australian federation and grandfather of Howard government minister Alexander Downer. According to Roberts, “an examination of the injustices and massacres of the frontier period reveals his name more frequently than any other Adelaide politician”. There is also a suburb named after him in Canberra.

Downer corresponded regularly with Inspector Foelsche, approving massacres while Attorney General (1881-84) and Premier (1885-87). Downer responded to outrage over the Daly River killings with a “private hearing” that exonerated those involved. He used his expertise as a barrister to defend William Willshire when he was brought to trial for massacres around Alice Springs, the only police officer ever charged for NT frontier killings.

Once Downer had seen the charges dismissed, he sent Willshire up to the Victoria River region with troopers and an endless supply of ammunition to continue his massacres.

Massacres of Aboriginal people to clear them from land continued in Australia into the 1920s. In Queensland alone it is estimated 25,000 Aboriginal people were killed by the Native Police and a similar number by punitive parties of squatters and their supporters.

Whereas an estimated 250,000 Aboriginal people lived in Queensland prior to colonisation, there were only 20,000 left alive by the time Australian troops set sail for Gallipoli in 1915.

Many Aboriginal people flocked to join the Australian armed forces in both the First and Second World Wars. A strong motivation for enlistment was to prove themselves the equal of any white person.

Aboriginal people had to slip through racist laws that prohibited their enlistment. They were then treated with contempt on their return, forced to live again under apartheid laws and cut out of programs to assist return soldiers.

There are many tragic stories of Aboriginal soldiers returning to families torn apart by the forced removal of children. Aboriginal names were not listed on honour rolls and Aboriginal solders were denied access to RSL clubs.

The hypocrisy of this “recognition” needs to be exposed. The government is quite happy with Aboriginal faces lined up amongst others waving the flag for empire. But they will never acknowledge the fighters who fell defending their homelands from the imperialist invasion of this country.

Aboriginal genocide was the foundation for the power and wealth now held by the grandsons and granddaughters of the colonial elite, who still rule a system which tramples Aboriginal rights in the name of profit.