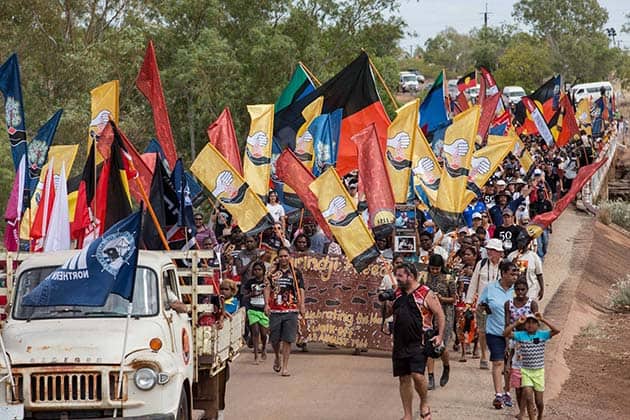 The Gurindji walk off, which launched the Land Rights movement, showed the potential for fusing trade union and anti-racist struggles, argues Paddy Gibson

On 23 August 1966, black workers launched a strike at Wave Hill cattle station in the Northern Territory. The station was controlled by Vestey’s, a major multinational beef corporation owned by a British aristocrat. The actions took place on Gurindji lands and were led by Vincent Lingiari, a Gurindji elder. Workers from other language groups pulled into Wave Hill such as Ngarinman, Bilinara, Warlpiri and Mudbara also took part.

The strike was a rebellion by people living in decrepit camps, paid mostly in rations and subject to horrific abuse from both the station and government authorities. Initially, the strikers demanded improvement in these conditions and equal pay with white workers, but went on to demand the return of land to Aboriginal control.

The strike was a landmark moment in the history of black struggle. It helped spark the growth of radical black activism in cities across Australia and put Land Rights on the national political agenda. It was also a watershed for the broader working class and socialist movements in Australia. United campaigning by black and white workers across the continent in support of the Gurindji saw longstanding historical barriers begin to break down.

The action helped to force many on the socialist left, for the first time, to really consider the continuing colonial nature of the Australian state and the similarities with Apartheid South Africa.

The strike at Wave Hill was not just a revolt against Lord Vestey, but against the conservative approach of the trade union officials to the fight for equal pay.

The experience of collective action in the union movement decisively shaped black struggle throughout the 20th century. Leading members of Aboriginal activist organisations established from the 1920s onward often had extensive union links. Strikes rocked Aboriginal reserves in NSW through the 1930s as unemployed black workers with experience fighting in unions were forced under new draconian laws during the Depression. The Pilbara strike of black stock workers in 1946 was a clear inspiration for Wave Hill. White waterside workers refused to load wool in solidarity with the Pilbara strikers. This kind of active support from white unionists had been very rare in Australian history.

During the 1950s, black workers in Darwin took strike action, pushing the North Australian Workers Union (NAWU) to back demands for wage justice. This helped feed into the efforts of the Federal Council for Aboriginal Advancement (later FCAATSI), who made equal pay a centrepiece of their agitation. A FCAA equal wages committee, led by Communists, campaigned for action from the ACTU who backed an NAWU case for equal pay lodged with the arbitration commission in 1964.

Black workers in the NT from different stations had been discussing the need for strike action for many years, meeting during race carnivals since the early 1960s. The arbitration commission ruled in favour of equal pay on NT cattle stations in 1965, but delayed the start date until December 1968.

Rather than satisfy the growing movement, this ruling sparked strike action to demand equal pay immediately. On 1 May 1966, black workers went on strike at Newcastle Waters station, on Mudburra country, 250 kilometres east of Wave Hill. The NAWU had employed an Aboriginal organiser Dexter Daniels, who believed many more strikes were possible. The union backed workers at Newcastle Waters. But Paddy Carrol, Secretary of the union and ALP member, wanted action contained while the ACTU tried to expedite pay increases through negotiations with employers and the government in Sydney and Canberra.

Militant black leaders in Darwin, particularly Daniels, talked to communists like the writer Frank Hardy and wharfie Brian Manning about challenging the conservative approach of the NAWU leadership while building support in the union movement. One initiative in July 1966 was the re-establishment of the NT Aboriginal Rights Council, with a meeting of 200 Aboriginal people at Rapid Creek in Darwin pledging support for the fight for equal pay, along with broader citizenship rights and control of reserve land. It was clear that even without formal NAWU backing, there was a network ready to support further strikes.

Daniels knew that workers at Wave Hill were ready for action. He had recently spent time with Vincent Lingiari while in hospital in Darwin and discussed the possibility of strikes. He set off for the station with instructions from Carroll to simply enquire about conditions, rather than pull people out on strike. But by the end of his visit, the Gurindji were ready to launch action.

Frank Hardy returned home to Sydney and organised through communist and broader union networks for a serious campaign in solidarity with the Gurindji. He helped organise a speaking tour of Dexter Daniels and strike leader Lupgna Giari, the first of many through the strike, which saw in excess of 60 meetings held to collect money and win support. Many of these meetings were at unionised work sites across Sydney and Melbourne. Thousands of pounds were collected or pledged to the strike camp.

By the end of 1966, the Gurindji action was already making gains. On a number of surrounding stations, black workers had received significant wage increases from employers fearing further action, and in some places equal pay. Vestey’s offered a pay increase of 125 per cent.

This brought the more fundamental nature of the Gurindji rebellion to the forefront. In Frank Hardy’s classic account of the strike The Unlucky Australians, he explained his gradual realisation that, despite the focus of white supporters on equal pay, for the Gurindji, “Tribal identity and Land are the real issues in this strike”.

At the end of the wet season, in March 1967, the strike camp moved to Wattie Creek, a place called Daguragu. Maps were prepared of an area around Daguragu that the Gurindji wanted to claim. This place held deep significance in terms of both Aboriginal spirituality and resistance history. Leaders explained to supporters that the area had many sacred sites and there were bones of Aboriginal people killed in massacres by white settlers held in caves within it.

The Gurindji claim of continuing tribal authority over land was based in a rejection of the legitimacy of colonial authority and the process of dispossession. Strike leader Tom Pincher said, “We Wave Hill Aborigine Native people bin called Gurindji. We bin here long time before them Vestey mob. They put up building, think ‘em they own this country. This is our country, all of this country bin Gurindji country”.

This was a potentially radical feature of black political consciousness that, as Hardy explained, the socialist movement had been largely ignorant of until the dramatic black-led actions of the 1960s, “I had not really expected that after three generations of white domination the Aborigines would still have a sense of owning the land… [but] they had talked about this all the time and their fathers before them. They wanted their land back”.

This consciousness was not just limited to Aboriginal people living in remote areas like Wave Hill. In Darwin, the Larrakia people began fighting for recognition of their rights as the true owners of the land, raising a flag over the Darwin court house in a ceremonial reclamation action in 1971. The Gurindji action gave confidence to black activists in southern states to start pushing longstanding demands around return of land to the front of the Aboriginal rights agenda.

A “Black Moratorium”, mobilising thousands of people across the country in 1972, following the establishment of the Aboriginal Tent Embassy in Canberra, put Land Rights at the front of a comprehensive list of demands around housing, education, employment and self-determination.

The Gurindji action had taken the form of a strike, using their leverage as workers to hit back at Vestey’s, a global beef empire. This connected them immediately to organised workers not only across Australia, but across the world. Workers in Vestey’s meatworks in London even took a day of strike action and sent donations to the Gurindji. The Black Moratorium saw thousands of workers take strike action to join the march, including wharfies, construction workers, teachers and municipal staff. Many of these unions had been active supporting the Gurindji since 1966.

Much of the popular memory of the Gurindji strike is focused on Gough Whitlam “handing back” Daguragu by pouring sand into the hands of Vincent Lingiari in 1975. But what Whitlam handed over that day was only a 30-year pastoral lease over a tiny area. It wasn’t until 1984 that the Gurindji won a more significant claim under the NT Aboriginal Land Rights Act (ALRA). And the ALRA, while undoubtedly an important victory, also aimed to undercut the radicalism of the struggle and split the movement—limiting itself to the NT and explicitly excluding urban claims like those made by the Larrakia.

Without the more thoroughgoing social transformation being fought for in the 1960s and early 1970s, Gurindji efforts at a co-operative cattle enterprise were easily sabotaged and the community was left in dire poverty. The Gurindji worked hard nonetheless to make a life for themselves in Daguragu, primarily using the Commonwealth funded Community Development Employment Projects (CDEP) scheme to build up some housing and local enterprises and services.

Many of these gains have been seriously attacked by the NT Intervention that began in 2007 and abolished CDEP. The government took a compulsory five-year lease over Daguragu and is now refusing to fund any housing maintenance because the Gurindji will not sign a 40-year lease. Many black workers are now paid to work for less than $10 an hour on the BasicsCard, which limits what they can buy, under punitive Centrelink regulations. Children are forcibly removed from the community due to malnutrition.

But the radical vision of the Gurindji leaders who led the strike in the 1960s remains alive. Many Aboriginal people still refuse to accept the colonial authority of the Intervention regime. The need for defiant action, unity behind a black vision of re-establishing connections to country and creative mobilisation of working class power, are all important lessons from the walk off that remain urgent for the struggles of today.