Andrew “Twiggy” Forrest and his wife Nicola were all over the national media in mid-October after donating $65 million to Western Australian universities, Australia’s single largest philanthropic gift.

“The latest and greatest” lauded one news headline. Tony Abbott told the 350 VIPs gathered at the gala function that “Andrew Forrest is serving our country twice” by “building the mines” but also by investing “in the lives of others”. 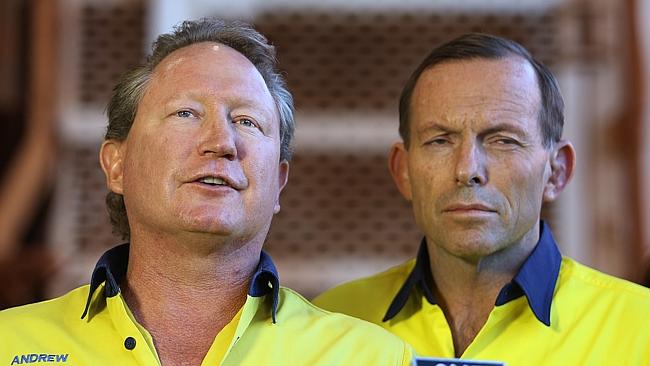 But a close look at his philanthropic endeavours shows they are more smoke and mirrors than substance.

While $65 million sounds like an incredible amount, we shouldn’t forget that 46.5 per cent of it is tax deductible—and paid by the taxpayer. Nor should we forget the billions we lost in tax revenue when Labor backed down from its original mining tax. Forrest, along with fellow billionaire Gina Rinehart, was on the front line opposing this tax, costing us $26.2 billion over a three year period, according to the Parliamentary Budget Office.

When you compare Forrest’s gift with his total wealth, it’s peanuts. Forrest owns a 30 per cent stake in the world’s fourth biggest iron ore producer and Business Review Weekly ranked him in 2013 as the ninth richest Australian with a personal fortune of $3.66 billion. In just two days following his “generous gift”, thanks to a spike in share values, his fortune increased by $440 million.

His other philanthropic efforts are equally hollow. Earlier this year he signed up to Bill and Melinda Gates and Warren Buffett’s Giving Pledge where the world’s billionaires, “commit to giving more than half of their wealth to philanthropy or charitable causes” before they die. It sounds good but the billionaires are allowed to “find their own unique ways to give” and the pledge is just a “moral commitment … not a legal contract”.

These headline grabbing philanthropic projects are more about pushing an ideological agenda and self aggrandizement than about relieving genuine suffering. Philanthropy is held up as an alternative to genuine rights and reform and we’re all expected to get behind big business, our saviour. The donation to the Western Australian universities will be used to establish the “Forrest Foundation” funding scholarships and a “Forrest Hall” for recipients to live in.

“Ending indigenous disparity” is one of his great projects, its centrepiece GenerationOne, launched in April 2010. This is effectively a campaigning arm for the Australian Employment Covenant, the government’s indigenous employment program. Fifty thousand jobs were going to be delivered to Aboriginal people in two years through big business’s pledges. But a pledge is not the same as actual jobs and in the three years since only 14,000 jobs have been secured. Thirty per cent did not last six months.

Forrest’s attitude is that unless Aboriginal people recognise his jobs in mining and the corporate world as their saviour, they are good-for-nothing bludgers.

His dispute with the Yindjibarndi Aboriginal Corporation (YAC) over royalties from his Solomon Hub mining project on Aboriginal land showed his paternalistic attitude. This project was set to raise $200 billion over a 30 year period and YAC demanded similar royalties to what other mining companies were paying. Forrest denounced this as “mining welfare” and denigrated the whole community by saying “little Aboriginal girls” in the local town of Roebourne were offering themselves for “the cost of a cigarette” and “I’m not going to encourage, with our cash, that kind of behaviour”.

Forrest also funded the documentary The Songs of the Mission which offers a “different perspective” on the Stolen Generations and features Aboriginal people who had a “positive” experience in the missions.

While the Australian media treat him like he walks on water he has many dubious connections. Both his in-laws were members of the fascist League of Rights. His sister-in-law married a prominent league member who organised a speaking tour of Holocaust denier David Irving.

His business past too is colourful. The Australian Securities and Investments Commission took legal action against him for misleading the market. He eventually won this case in the High Court but not before three federal court judges had found him guilty of misleading and deceptive practices.

In the 1980s he knocked about with a number of corporate fraudsters that ended up in jail. Forrest has written a commendation for one, Rodney Adler, saying he’s “paid a very high price”. In 2005 he attended a dinner organised by convicted fraudster and business lobbyist Brian Burke, along with Kevin Rudd. “Anyone who deals with Mr Brian Burke” railed former Treasurer Peter Costello is “morally and politically compromised.” To say the least.

Twiggy’s is a self-righteous pro-capitalist view of the world, with an absolute faith in people like himself running the show. There’s no reason to be grateful for the crumbs off his table.