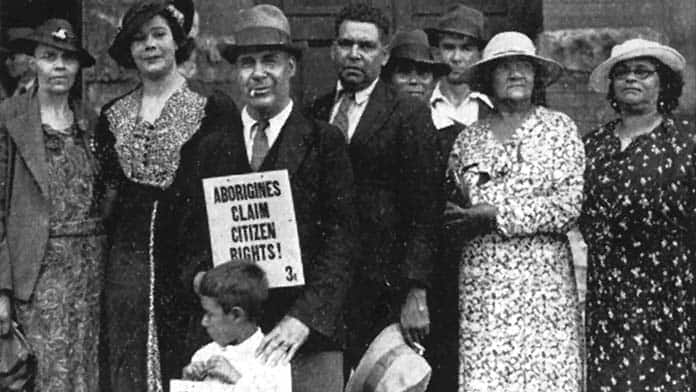 Luke Ottavi continues our series on key Indigenous activists with a look at Bill Ferguson, who fought racist laws in NSW against Aboriginal people to demand equal rights

Aboriginal activist William (Bill) Ferguson helped lead a co-ordinated campaign against the draconian NSW Aborigines Protection Board (APB) in the 1930s. Bill spent decades fighting against the systemic oppression that was killing and marginalising his people.

Bill was born on 24 July 1882 at Darlington Point in central NSW, on the country of the Wiradjuri people. Bill’s father was a Scottish immigrant who worked as a rural labourer and a shearer. Bill’s mother, Emily Ford, was an Aboriginal woman who worked at Toganmain station on the Murrumbidgee river.

At 14 years old, Bill began shearing in sheds in the Riverina region of southern NSW and quickly became a member of the AWU (Australian Workers Union). At one point Bill was shed organiser for the union.

Bill married Margaret Gowans in 1911 and settled in Gulargambone, north of Dubbo, where he re-formed the local branch of the Labor Party, joining the campaign against conscription during the First World War.

After a short stint in the postal service before returning to the shearing sheds, Bill and Margaret settled in Dubbo with their 12 children in 1933. There was already some opposition to discrimination against Aboriginal people by white organisers in the unemployed workers movement and the local Labor Party.

Bill was to draw on his experience as a unionist and a Labor Party member in his forthcoming campaigns for Aboriginal rights.

In NSW the APB was formed in 1883 to control Aboriginal people and take charge of the Reserve lands where many of them lived.

In 1917 NSW Parliament expanded its powers, making it easier to take Aboriginal children from their parents in order to sever them from their communities. This intensified the Stolen Generations in NSW, and the attempt to assimilate Aboriginal people into the broader population. This was a policy of genocide designed to see Aboriginal people eventually disappear.

During the Depression in the early 1930s, Aboriginal people were denied mainstream dole and family endowment payments and forced to relocate to APB stations to subsist on inferior rations. This inflicted widespread malnutrition and shocking health conditions.

Many refused to move and so in 1936, the NSW Parliament moved to increase the APB’s powers. The APB now had the power to forcibly move all Aboriginal people, whether living on the outskirts of towns or on stations, and concentrate them on Aboriginal reserves.

Ferguson had been opposed to the punitive controls the Protection Board exercised over Aboriginal people for some time, but the increase in its powers pushed him to act.

He launched the Aborigines Progressive Association (APA) on 27 June 1937 in Dubbo. The meeting was attended mostly by Aboriginal people, including some from the nearby Talbragar reserve.

Bill spoke based on information and first hand-accounts from people he had visited and written to on reserves.

He told the audience how rations were withheld from the people at Bulgandramine as an arbitrary punishment, with the community too afraid to report the incident for fear that the manager would give out expulsion orders.

Bill was particularly concerned to outline why the fight for Aboriginal rights was important for the entire working class. He spoke about the low wages paid to Aboriginal workers at Pilliga sawmill, despite a sawmill paying union rates operating in nearby Dubbo. He explained how Aboriginal workers were being used as cheap labour, making wealthy squatters wealthier, and how this was being used to break down working class conditions.

The meeting passed a motion calling for the abolition of the APB, demanding full citizenship rights for all Aboriginal people, and direct representation in Parliament, similar to the situation in Aotearoa (New Zealand) where Maori had their own dedicated seats.

In 1937 Bill visited reserves across NSW and collected information about the conditions and treatment Aboriginal people were subjected to, holding meetings to establish branches of the APA.

He sought out press coverage in order to bring attention to discrimination and abuse, publishing and replying to articles and comments in newspapers such as the Sydney Morning Herald.

Bill also used his union and Labor Party connections to gain support for his cause. He was able to address the NSW Labour Council in October 1937, and after his impassioned speech, it adopted a detailed motion calling for equal rights in wages and unemployment relief, an end to all discrimination and full Aboriginal representation on the APB.

The motion was based on the Communist Party’s “Draft Program on Aborigines”.

He pushed the sympathetic Labor MP Mark Davidson, representing a part of Western NSW not far from where Ferguson lived in Dubbo, to move to establish a Parliamentary Select Committee into the operations of the Board.

Ferguson was hopeful that the Select Committee would expose the cruelty and mismanagement of the Protection Board and lead to sweeping changes. It heard evidence that at Brewarrina, Angledool, Cumeroogunga and Walcha reserves trachoma had been rampant due to overcrowding and poor sanitation.

The Committee also heard of understaffing, with school children taught only two hours a day. Bill was able to give evidence, bring in witnesses, and also cross examine witnesses, including Board officials. However, as the hearings continued, politicians stopped attending. The Select Committee made no report to the government, dying due to political indifference.

But the APA had attracted a number of talented Aboriginal activists, including Jack Patten and Pearl Gibbs, and gained new support from predominantly white organisations such as the Feminist Club, United Women’s Association, the Methodist Church, and the Church Missionary Society.

On 12 January 1938, Ferguson and Patten sent copies of a manifesto Aborigines Claim Citizenship Rights! to the press. It went out with a notice that the APA would hold a public meeting and march on 26 January to mark 150 years since invasion as a Day of Mourning.

This famous protest was co-organised with Aboriginal activist William Cooper, who travelled for it from Melbourne.

Afterwards, on 31 January Ferguson, Patten, Gibbs and around 20 Aboriginal people met privately with then Prime Minister Lyons and Minister for the Interior John McEwen. The Prime Minister was presented with a document demanding equal rights, including the same educational opportunities as white people, equal wages, and equal rights to own land and property.

Whilst the Prime Minister would not act on any of these demands, it gave the APA a clear purpose and program for their continuing activism.

Following the outbreak of the Second World War, the APA began a concerted campaign to have Aboriginal representatives elected to the APB.

This was a more moderate position than earlier APA calls for complete abolition of the APB, crafted to win Labor Party support and concrete reform.

The failure of these reforms to drive any real change eventually saw Ferguson leave the Labor Party in despair.

From 1941-47 Labor held government in NSW. As a result of pressure, it agreed to place two elected Aboriginal representatives on the Board. However, some Labor politicians were determined to keep Bill off.

The APA launched a grassroots campaign to elect Bill and Walter Page to the Board, winning a comfortable majority of votes.

When all other nominations were withdrawn, the Labor government gave in. Bill and Page were elected, with Bill serving from 1944-49.

Despite his efforts on the Board, government officials were unresponsive to his demands for Aboriginal rights and self-determination.

The Labor government in power federally under Ben Chifley had also refused to act. Feeling betrayed by the Labor Party and heart-broken, Bill resigned from the Board and cancelled his Labor Party membership after 32 years.

Disillusioned, Bill ran as an independent for the seat of Lawson (containing Dubbo and surrounding districts) in the 1949 federal election. He won just 388 votes. Bill collapsed after addressing an election meeting on 8 December 1949 and died shortly after.

The deepening poverty and discrimination faced by Aboriginal people after the end of the war in 1945, as they were driven out of jobs, and still faced segregation in schools and in country towns, had often driven Bill to despair.

But his decades of activism did much to win sections of the union movement and broader society to the fight against discrimination and racism faced by Aboriginal people.

Andrews government pushes on with attack on Djap Wurrung

Unions and Aboriginal people unite to save Deebing Creek