Aboriginal community closures: ‘This is an attempt to destroy our culture’ 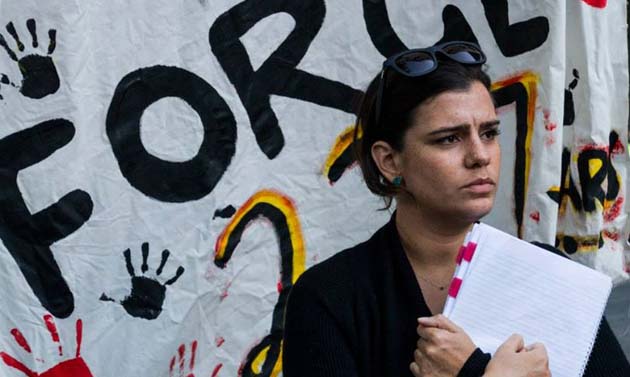 On Wednesday 11 March Tony Abbott, visiting Kalgoorlie in the WA Goldfields, strongly endorsed WA Premier Colin Barnett’s decision to shut down 150 remote Aboriginal communities after Commonwealth funding cuts. WA is planning to withdraw essential services such as power and water. In a statement condemned as racist by Aboriginal leaders across the political spectrum Abbott said, “the taxpayer can not be expected to endlessly fund people’s lifestyle choices”.

Snap protests were held across Australia on “Black Friday”, 13 March, including a rally of more than 1000 people in Melbourne. Meriki Onus, protest organiser from the youth group Warriors of the Aboriginal Resistance, spoke to Solidarity about the need to resist these community closures and the broader agenda of assimilation.

Why was this protest called and why did it get such as strong response?

The rally was very last minute, called at 12 hours notice. I posted it in response to the Federal and WA Government’s decision to close down remote Aboriginal communities in WA. There was a real emotional reaction to Tony Abbott’s comments about “lifestyle choices” in particular. People in Melbourne were disgusted. It’s so clear that these are attempts to destroy our culture. It is just a further attempt at assimilation and genocide.

Colin Barnett has offered all these reasons about doing this for the welfare of people in these communities. No one believes them any more, particularly after the recent experience of the NT Intervention. There you had a blatant lie [that all remote communities had pedophile rings] that justified very similar policies. There seems to be change in the air. We’ve really noticed it in Melbourne over these last 12 months. People want to hear the truth about what is going on for our people, not the sugar-coated version.

What will be the impact of these community closures?

Aboriginal activists in Perth have re-established the Nyoongar Tent Embassy as a refugee camp for people being pushed off their communities. They are estimating that 20,000 people will be made homeless. We know that WA has a terrible track record with the treatment of Aboriginal people. It is a police state [with one of the highest incarceration rates for black people in the world]. There are horrific welfare practices with forced child removal, terrible suicide rates, I can only imagine the terrible social impact that making so many people homeless will have in WA.

Assimilation is very stark when they are shutting down whole communities of people speaking Aboriginal languages on their lands, but it is very much the policy position in relation to Aboriginal people right across Australia. How do you see the continued drive for assimilation operating in Victoria?

We know more than anyone in Victoria what dispossession does to a people. We have people working on learning language now, but it is a very small group. I don’t think there are any fluent speakers of Aboriginal language anywhere in Victoria. That’s from dispossession, from the mission days, the stolen generation, those attempts to destroy the cultures of Indigenous peoples. This is exactly what our brothers and sisters in remote areas, in the NT and WA, are facing today.

The federal government’s decision to stop funding communities is happening right across Australia, like at Lake Tyers Aboriginal Trust (in Victoria). The state government have said they will keep providing funding, but are making it very hard for an Aboriginal person to live at Lake Tyers, the government control of Aboriginal people’s lives there is horrendous. There has been an administrator imposed on that community for more than 15 years. They are trying to displace us all in Australia. It’s just a final nail in the frontier wars coffin, it’s not over.

We have numbers of Aboriginal children being removed by the Department of Human Services absolutely blowing out over the last few years. There are about 1000 Aboriginal children in “out of home care” at the moment in Victoria. The way things are going, that will be 1500 by the end of this year.

Assimilation is a fundamental part of colonisation. This is still continuing. Land acquisition goes hand in hand with the death of Indigenous peoples. It’s fundamental for the Australian government and other colonial governments to do this.

If we were a strong nation, many nations of people that never experienced the stolen generations, if we were raised to know our own law and language, they would have a hard time controlling our country and mining our country. It is essential for them.

How do the current funding cuts to Aboriginal organisations contribute to this process?

Aboriginal community controlled services were originally set up for Aboriginal people to have some kind of political self-determination in their lives. It makes sense that Tony Abbott would cut that from us. It’s part of forcing us into the “mainstream”. Even the organisations that don’t get cut suffer, because they become overloaded with the spill-over from other cuts, with so many people with complex social needs.

So attacking these organisations is about trying to stop ways people can maintain a collective identity?

They have, in some sense, tried to destroy that already, even without funding cuts. Just the funding requirements they impose on our organisations now, mean that they are constantly trying to reach the targets set by the government funding body, rather than being accountable to the needs of the community. So they come to look more and more just like the “mainstream” service.

What are the next steps in the fight against community closures?

This fight is not over. There are already plans for what is happening next. We need to find ways to keep Melbourne city engaged, keep this issue on the platform and create change. We have a lot of work to do. It’s our responsibility to educate each other and get out with our feet on the streets and protest what we see happening in WA.