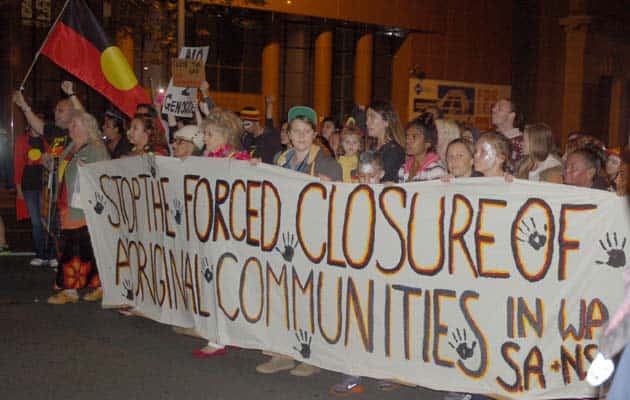 Tony Abbott’s “lifestyle choices” gaffe has drawn attention to the federal policy of defunding Aboriginal communities—and succeeded in sparking lively and large demonstrations around the country.

As the federal government withdraws funding over the next two years, the WA Liberal government plans to close down 100 to 150 small Aboriginal communities, leaving them without power, water and essential services.

Over 5000 took to the streets of Melbourne and blocked traffic both in March and April, while thousands braved a downpour to march in Sydney on 10 April. Brisbane, Perth, Broome, Darwin, Roeburne, Alice Spings, Moree and even the posh Queensland beachside town of Noosa have all seen angry demonstrators on the streets.

“This is a third wave of colonisation,” explained Ebony, an activist from Kimberley, WA, to Sydney’s rally on 10 April, “[for them] profit and development comes before community, culture and people.”

WA Liberal Premier Barnett responded to criticism by lashing out, saying, “the abuse and neglect of young children [in remote communities], is a disgrace to this state” and citing rates of gonorrhoea in young teenagers.

But it’s the same racist beat up that John Howard used to justify his Northern Territory Intervention in 2007. As researcher Marlene Kong pointed out, STI rates are high in all remote communities largely because of unprotected sex amongst youth, not linked to child sexual abuse.

The withdrawal of funds follows a near decade of policies like the Intervention, the roll out of income management, and rhetoric that funding Aboriginal communities is “unviable”.

Rather than take responsibility for decades of racism that has entrenched Aboriginal disadvantage, politicians like Barnett and Abbott blame Aboriginal people and push assimilation as the solution.

At the same time, the federal government is trying to find budget savings by attacking the most vulnerable and cutting public services, creating possibilities of linking up with trade unions and the fight against the next federal budget.

The Australian Council of Trade Unions has passed a resolution in solidarity with the campaign, and Secretary Dave Oliver and President Ged Kearney marched in Melbourne.

Already the heat has had an effect. On Monday April 13, the federal government agreed to restore funding to 60 communities on the APY lands in South Australia for the time being.

The rally in Sydney took up the issue of Aboriginal community closures Australia wide and marched to the Block in Redfern to demand Aboriginal housing, demolished more than ten years ago, be rebuilt on the historic site.

The Block is another area of Aboriginal land, given back to Aboriginal people in 1973, where they have been moved off.

The Redfern Aboriginal Tent Embassy has maintained a constant protest camp at the Block for almost a year, stopping attempts by the Aboriginal Housing Company and developer Deicorp to begin commercial development.

The campaign has been boosted by a proposal from the CFMEU, who cover construction workers.

Rebel Hanlon, NSW Assistant Secretary of the CFMEU, spoke at the Sydney rally on 10 April saying, “We’ve got to take the fight up, send a clear message … nothing to be built on that land [The Block] until we get affordable housing and [until] we get a guarantee from the government that we’ll get affordable housing built, before we’ll turn one drop of soil.”

The possibility of a union ban on construction now creates even more problems for the developers. It shows the possibility of winning working class support to stop community closures and cuts to Aboriginal services and demand funding.

More rallies against community closures have been called around the country on May 1, a nod to the historic Pilbara walk off that began on May 1 in 1946.