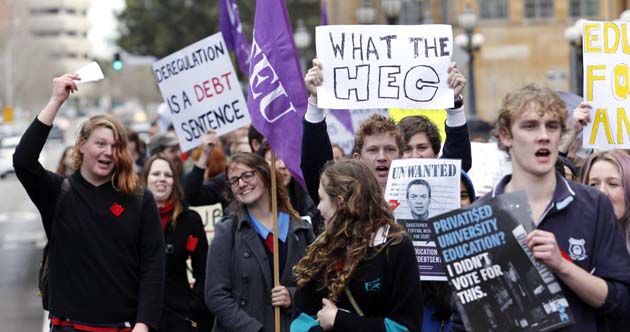 Abbott’s new year has got off to a bad start. His “plan B” to attack Medicare is already in tatters after the government was forced to dump a key plank that could have seen doctor’s visits cost $20.

GPs, the public, unions, Labor and then a majority of cross-bench Senators all voiced their opposition to cutting the Medicare rebate for consultations less than ten minutes long.

After the Victorian Liberals loss in December after one term, a one term Tony looks much more possible. A big swing against Campbell Newman in Queensland on 31 January will be a major setback for Abbott.

Abbott has tried to use the Martin Place hostage crisis and now the terror attacks in Paris to beat up fear about terrorism and build his credibility as the “strong man” most able to keep “us” safe. So far, it hasn’t worked. Both Morgan and Essential polls in January showed Bill Shorten ahead of Abbott as preferred prime minister.

But the Charlie Hebdo killings have bolstered Islamophobia, with many stooping to defend the racist magazine in the name of free speech. In Australia, the racists crawled out from under their rocks demanding the right to publish racist articles in Australia.

In France the mainstream political parties quickly combined to channel the shock over the killings into a “national unity” march led by world leaders; an assortment of hypocrites responsible for the deaths of hundreds of thousands in the war in Iraq and Afghanistan, linking arms with Israeli Prime Minister Netanyahu, the butcher of Gaza.

Those leaders have fanned the flames of Islamophobia. The “free press” in the West has given any amount of space for Islamophobes to push claims that there is something fundamental about Islam itself that encourages terrorism, tarring all Muslims with the brush of extremism.

Abbott’s war-mongering, his fear-mongering and his anti-terror laws will have to be actively fought.

No turning back on budget

Abbott and Treasurer Joe Hockey have signaled that they will be trying to avoid too many unpopular policies in their next budget. But they can’t help themselves.

The $7 Medicare co-payment was heading for defeat in the Senate. So Abbott unveiled a “plan B” in December, replacing the $7 co-payment with…a $5 co-payment.

Worse, the government picked a fight with GPs by trying to cut payments for “ten minute medicine”. When new Health Minister Sussan Ley was forced to ditch the change she still insisted that “a modest co-payment” was still on the table.

Just before Christmas, Abbott’s university deregulation plans were defeated in the Senate. But Education Minister Pyne immediately re-introduced another version into Parliament, and has pledged to put it back to the Senate in February. And the government went ahead with $8 million of TV, print and radio ads to keep promoting the changes nobody wants.

Abbott has also set the scene to push for an increase in the GST.

We can’t just rely on falling polls. If Abbott is going to be beaten, there will need to be a fight.

We need to revive the campaigns against his budget attacks, especially over student fees and Medicare. Abbott is still dangerous every day he remains in office. In late November the government cut $254 million out of the ABC. In late December housing and homelessness services were defunded as part of $240 million of cuts to social services. Health funding cuts to the states over the next four years total $1.8 billion.

A stronger union response is vital. The CPSU has the chance to wage an industrial fight against Abbott, something everyone should support. The union has begun work bans, but public sector-wide strike action would put real pressure on Abbott and win wide support.

It’s clear Abbott will keep pushing. Deregulation was only defeated in the Senate, last time, with the unreliable votes of Jacqui Lambie, Nick Xenophon and the Palmer United Party.

Xenophon, for example, has ruled out voting for deregulation but says he would support other fee increases.

Every student needs to help build the National Day of Action on 25 March. Students need to hit the lectures, gates and lunch halls to make sure everyone knows that the deregulation threat is real.

The plans for nationwide “March in March” rallies on 21 and 22 March will be another focus to mobilise against every aspect of Abbott’s agenda—on uni fees, Medicare and refugees. We need union contingents on these rallies.

A union national day of protest against Medicare in February was put on hold when Abbott backed off his latest attack. But with Medicare still in Abbott’s sights, a major union rally closer to the budget would keep up the pressure.

We can’t wait two more years to bury Abbott. In 2015, we need to fight for free education, free universal healthcare and to free the refugees.

The Liberals are preparing for the next election by spending money on issues that have hurt them in recent months—aged care and violence against women. But their budget offers no real solutions and is riddled with nasty measures that illustrate their real agenda.