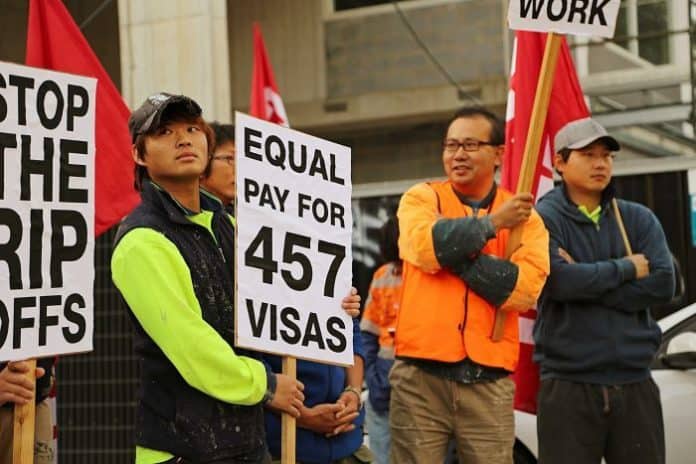 Bill Shorten has stepped up his attack on 457 visas in the wake of Trump’s election in the US.

Drawing the conclusion that xenophobia is the key to winning support amongst workers, he declared, “We’re not going to lose our blue-collar voters like the Democrats did.”

In words that could have come from the mouth of Trump, Shorten declared, “We will buy Australian, build Australian, make in Australia and employ Australians”.

Both Labor and The Greens moved amendments to Turnbull’s ABCC legislation designed to make it harder to employ 457 visa workers in the construction industry. The Greens openly declared this was an attempt to see if racist Pauline Hanson was “serious” about putting curbs on foreign workers.

This is a dagger to the heart of union organising in a country with such a large migrant population.

If local workers think migrants are to blame for stealing jobs and driving down wages this will set us against each other and divide the working class.

Bosses do try to exploit migrant workers and employ them on poor wages and conditions. The solution to this is to organise them into the unions and fight to demand better conditions, not to campaign against them coming here.

The Coalition responded with a disgraceful move to reduce the period 457 workers are allowed to remain in the country if they lose their job. They will now have just 60 days, instead of 90, to find another job or face deportation. This will only make 457 workers even more vulnerable to exploitation, because their boss controls their right to be in the country.